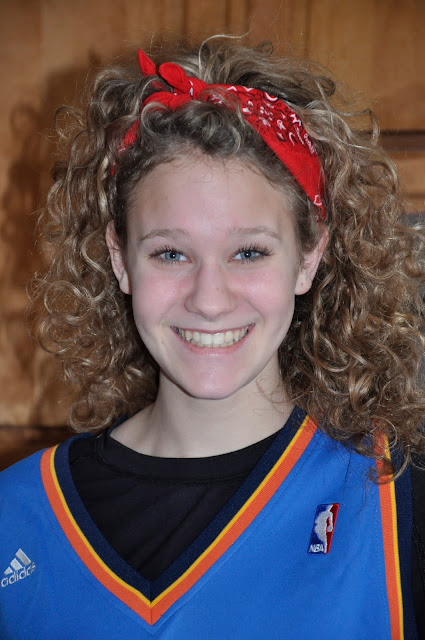 you know...the day they make fun of
everything we were and did...
but mostly... 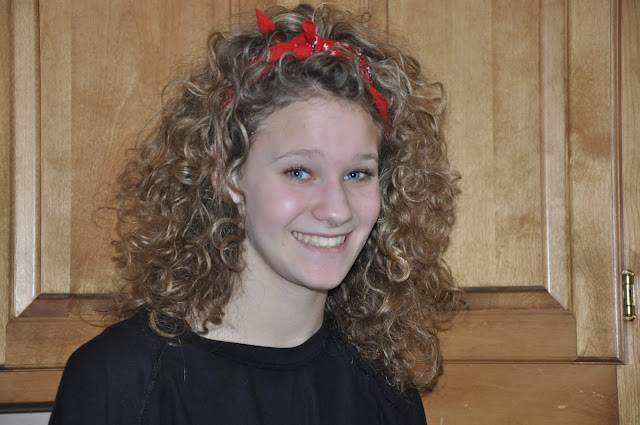 they mock the hair.
The hair was big.
I am still not ashamed of big hair.
I even helped her style it this morning...how did I do?
(Nobody who was under age 10 in the 80's can answer that question...you are in the mocking category and thereby disqualified.)
Posted by Suzanne at 3:03 PM 1 comment:

All in a Day's Travels

We began our journey to Christmas this year at 4:30 am by leaving home in the blackest of black part of the night.  No glimmer of dawn cheered us...or pried itself between the eyelids the 6 of us who weren't driving!
By 8:00 we were starving, and in an uncharacteristic move that had us all feeling a bit edgy,
Tim, the "you've got 3 minutes to use the bathroom and we're leaving" guy,
suggested...yes SUGGESTED we stop at Perkins.
Perkins is a sit down restaurant.
The universe was upside down. 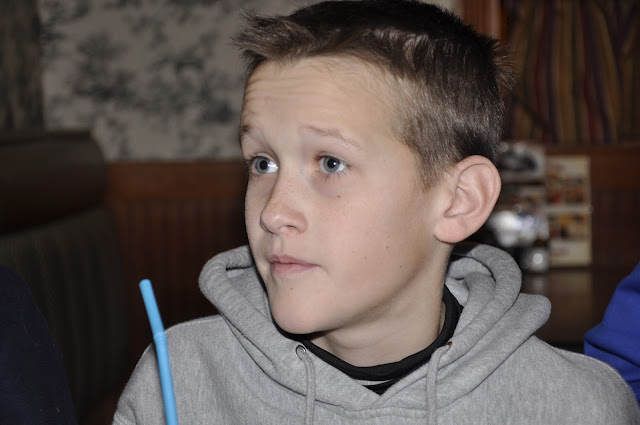 "Is this really happening Mom?  Are we really eating a sit down breakfast at the very BEGINNING of a day long drive?  Can we DO this?" 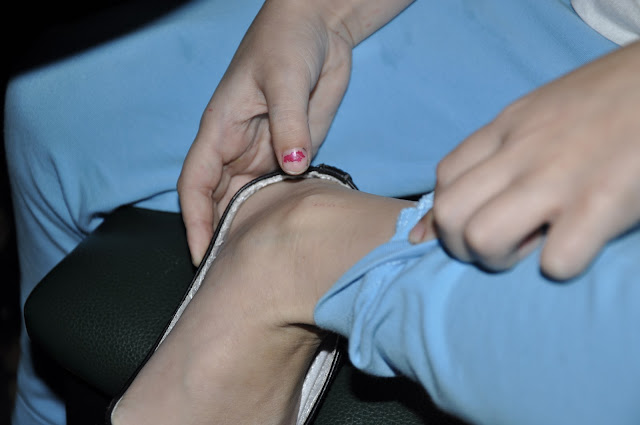 Lily coped by pointing out her various rashes. 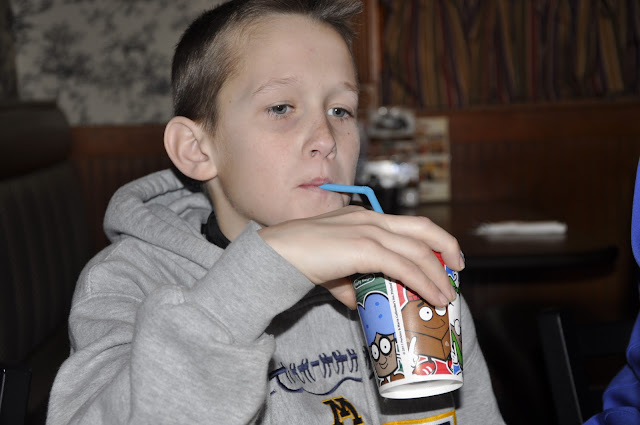 Thinking he must be in a dream, Timmy ordered off the kid's menu so that he could have the syrupy red kool-aid drink that comes with it.
Ugh. 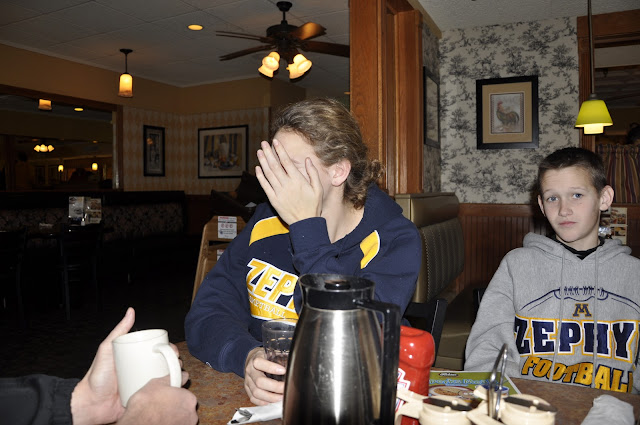 Not everyone was ready to face the reality of that drink...
or the camera!
Flash! 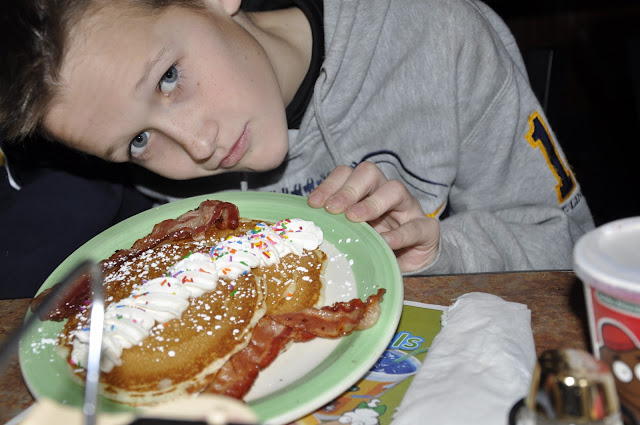 Breakfast the way it's supposed to be...
washed down with the red, super saturated sugar solution.. 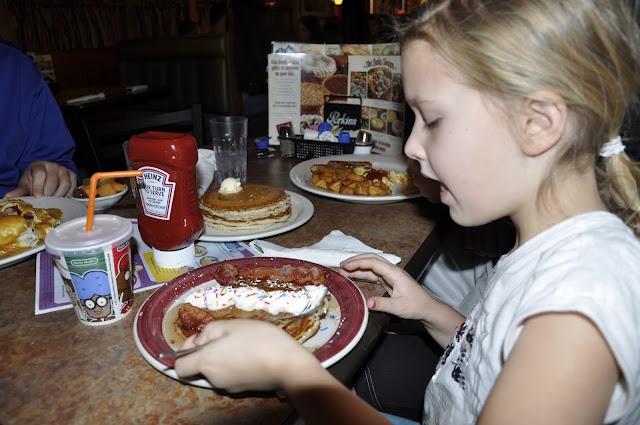 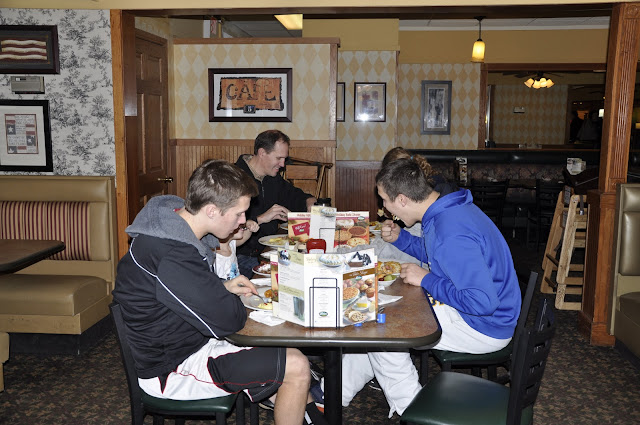 Andrew had his usual...the Terrific Twelve, or the Killer Twelve or Something Twelve which consists of...
pretty much everything on the breakfast menu.
Zach is an Egg Benedict man all the way, loyal and true.
Katie...all I remember was she ordered extra meat...
and sat far away from the big boys.
She's no dummy. 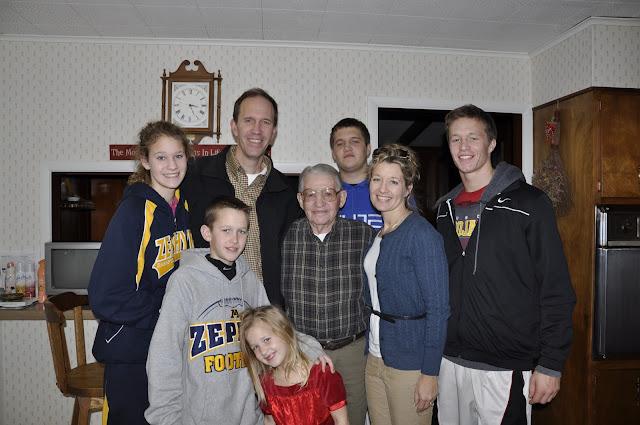 Nine hours later, we joined with my sister and her husband Darrin and spent a couple treasured hours visiting with my Grandpa Louie.
That right there is one loving and loved man. 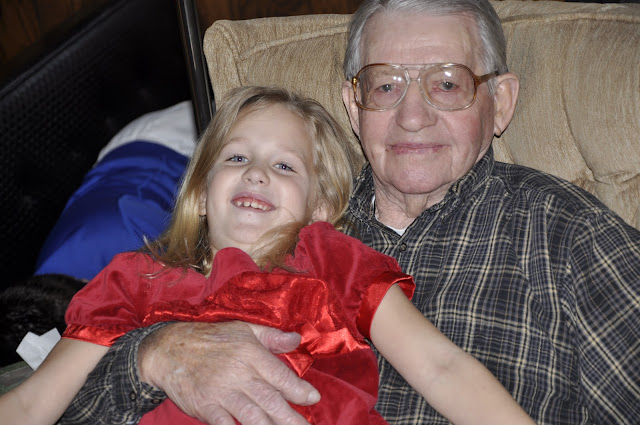 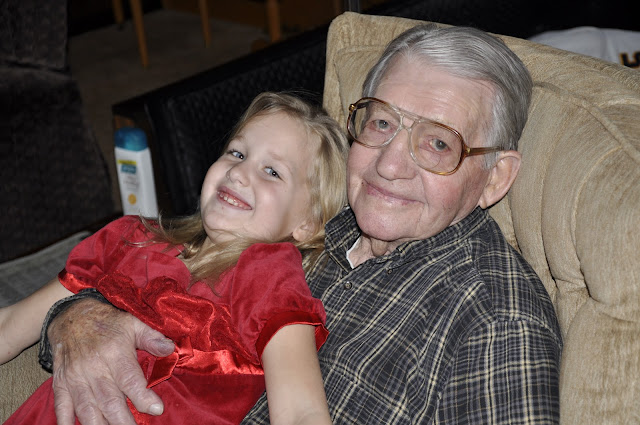 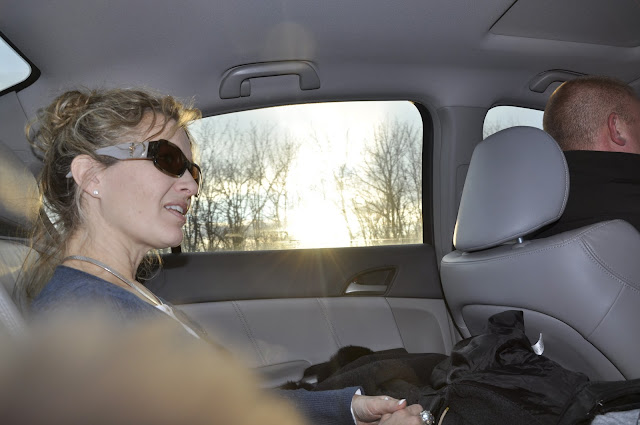 Somehow, Lily got her hands on the camera and took the only picture (above) I have all day of Darrin, even though he was kind enough to drive us around and treat us to diet pepsis whenever we so wished.  That's the back of his head as he chauffeured Sarah, Lily and myself to... 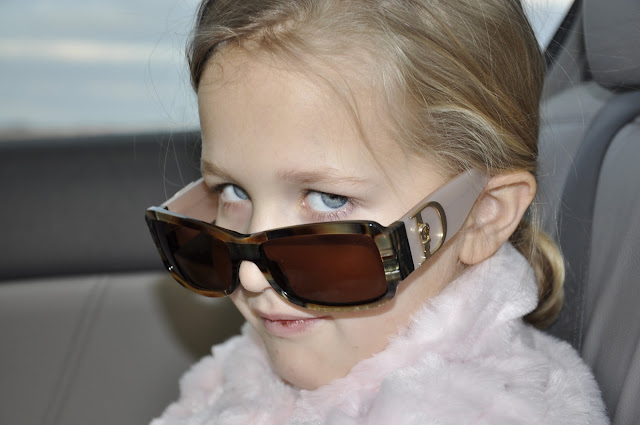 isn't it obvious where we were going? 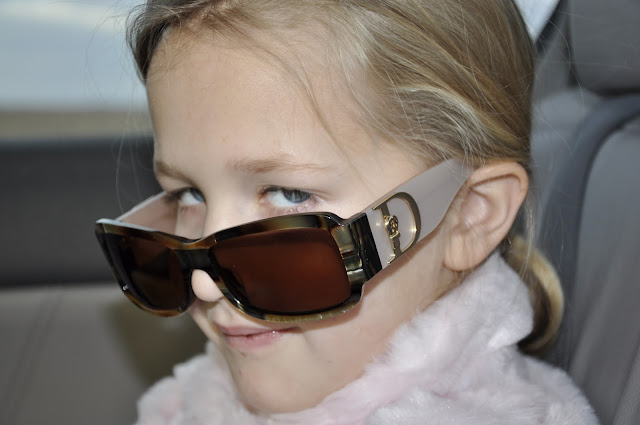 Can you guess?
We started the day at Perkins in our grubs... 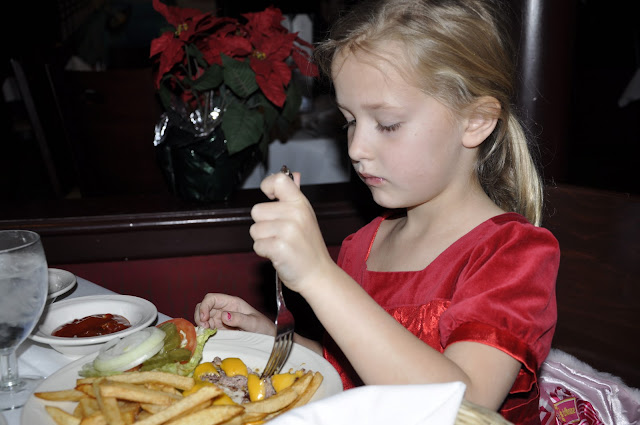 ...and ended it with a white table cloth Italian dinner... 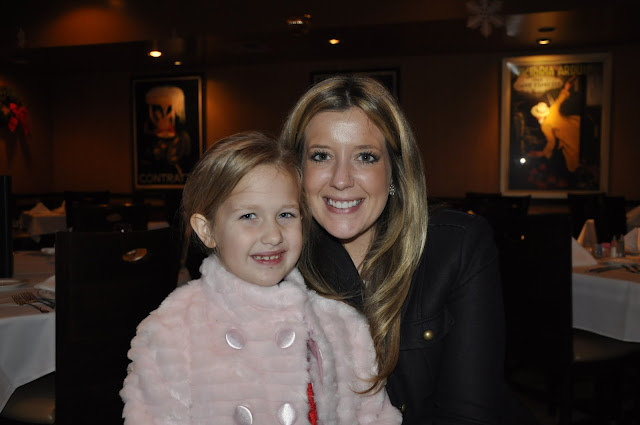 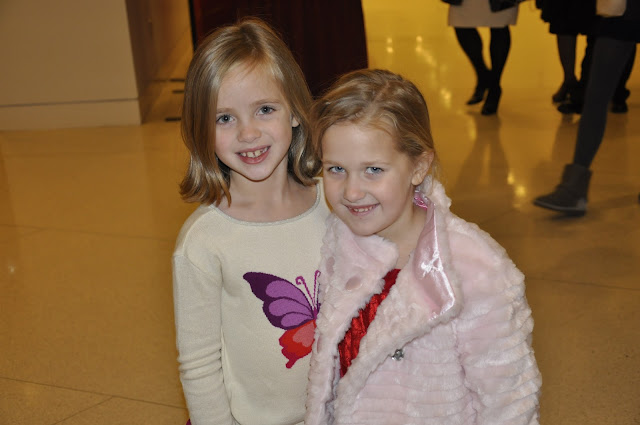 ...meet the cousins at....
THE ST. LOUIS BALLET PRODUCTION OF THE NUTCRACKER! 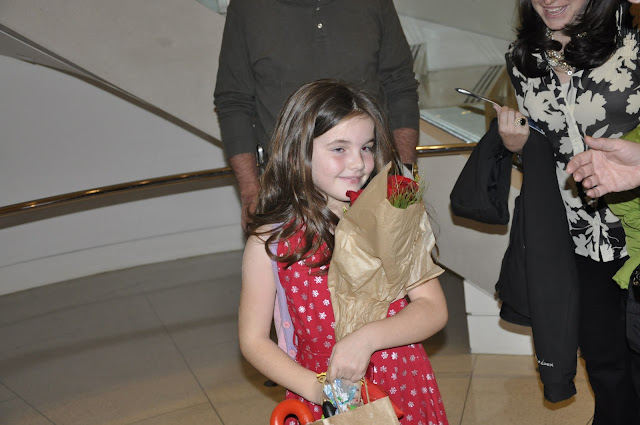 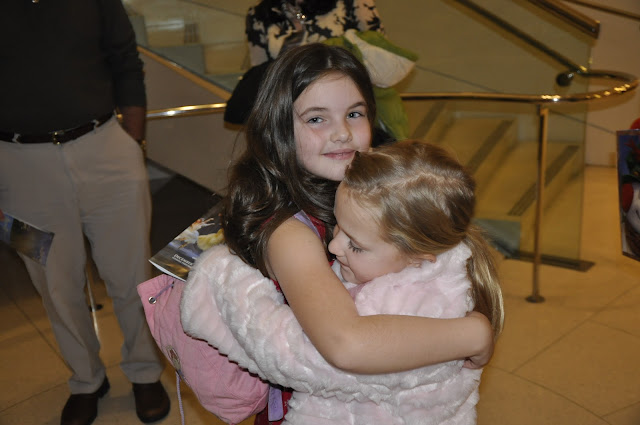 We all stood around and congratulated her on her performance, while... 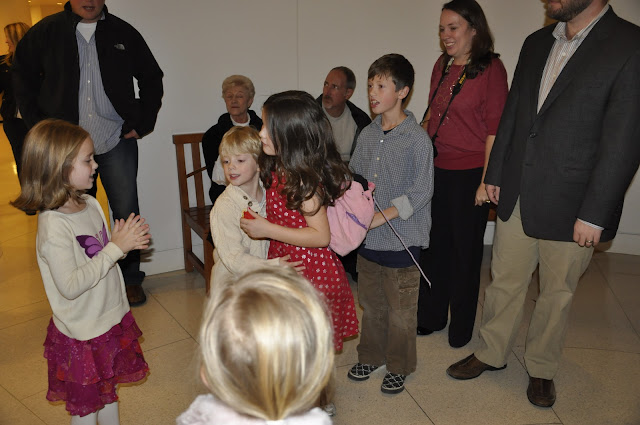 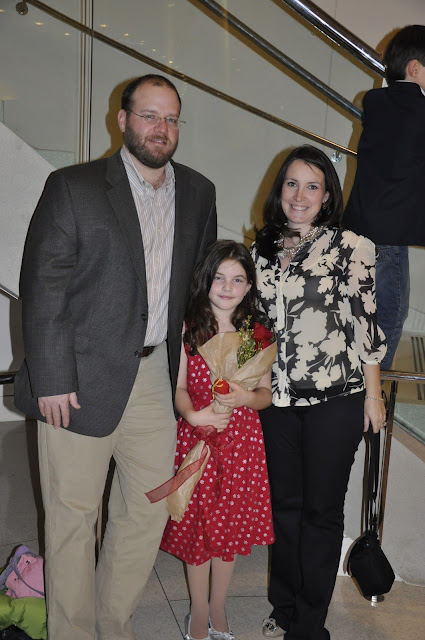 ...which were set to begin the next day.
The boys and Katie didn't get to see the ballet, but they were at my parents' house eating big steaks, so everybody was happy.
It was a great day.
Note:  Although you just saw the back of Darrin's head today, I have a post coming up that reveals him for the warrior he is, front and center.  But I have to get his permission to post it first.  Excuse me while I go do that now.  Thanks.
Posted by Suzanne at 12:54 PM No comments:

We had a short visit over the Christmas holiday
with my sweet Grandpa Louie.
We spent a couple of hours in his living room
listening to him reminisce.
It was precious, precious time.
I learn something new each time we do this, and this time I learned that
these two...the ones pictured below, have a couple of things in common. 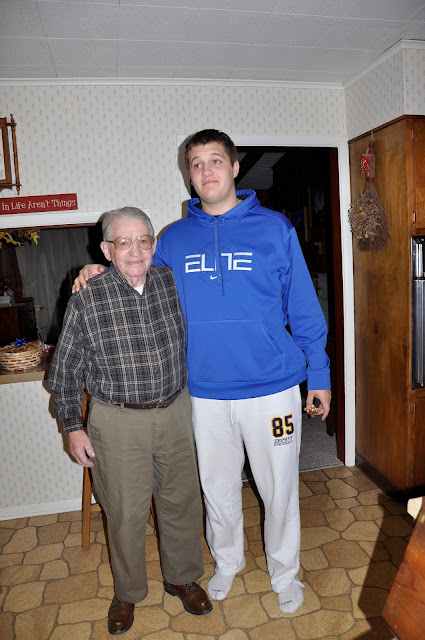 Yes, yes they do.
They both have hearts of gold with just enough spunk
woven in to make life interesting,
and.....
They both played "tight end" in football!!!
(For some reason that name makes me laugh....
when I hear it I think of tight wads and rear ends...ah but I digress....)
Yes, you heard it here first!
Grandpa, it appears, "walked on" the college football team and played tight end,
the same position Zach plays now! 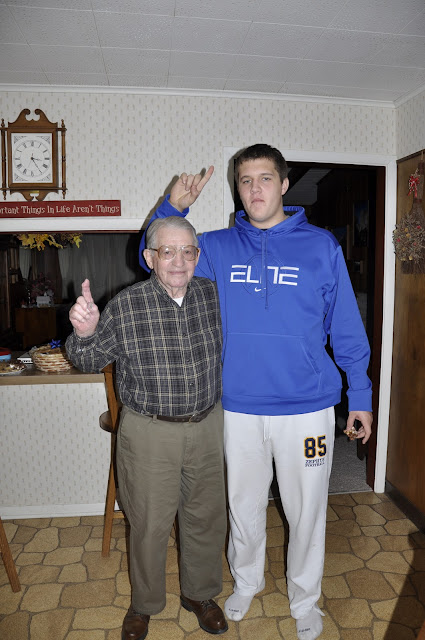 Since the holidays, I've been going through pictures.
Which means I've been trying to process and print out a decade's worth of pictures.
It's not easy being me.
So by the time I process all the pictures,
I have no patience left to blog
or time....
But nevertheless, interesting things have been happening in our house
on a regular basis... 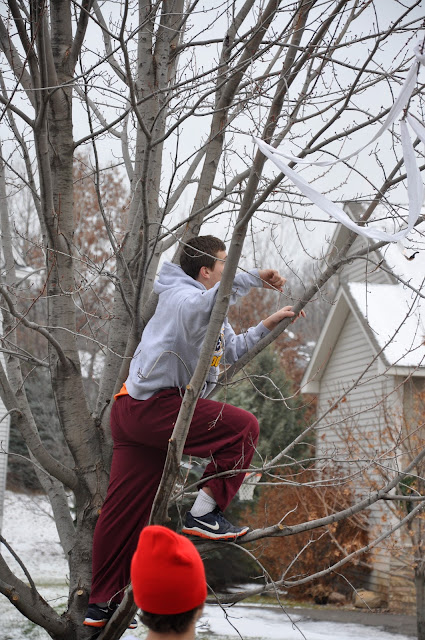 a fact which, I am reminded of as I go through all these photos.
I've learned a lot of things.
Like:
I really need a second pair of cotton yoga pants because I wear
the one pair I have in every picture.
And, iphoto's retouch tool works incredibly on blemishes
and crows feet
and even under eye shadows....
But if you try to erase the "turkey" lines on  your neck,
you wind up looking like a bobble head.
You've been warned. 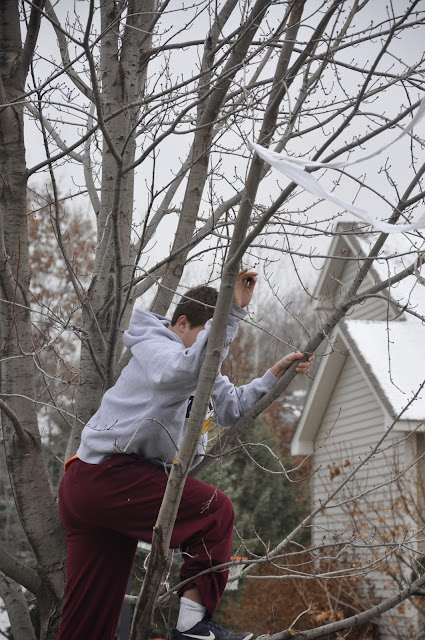 And I take a hugely disproportionate number of pictures of my fifth child Lily
compared to ...anybody who's ever had their picture taken on the face of the planet.
I am hoping that this will offset the fact that I have had her picture taken
in a studio...
twice...
yep...
Once when she was 18 months and then when she was six.
I'm TERRIBLE!
It's just the HEADACHE of it all...getting the outfit ready, getting the child
CLEAN, fixing the squirrelly hair, getting the appointment...
I could go on. 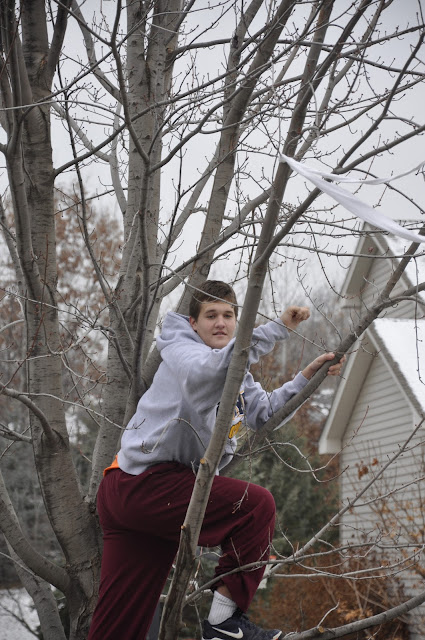 Pretty much the only time I take pictures of the other kids is when they are doing silly things like
climbing on branches that are much too small for them to be climbing on.
What you don't see here is that he is about to light that toilet paper on fire.
Cause somebody told him that was a good way
to get rid of the t.p. in the tree.
Important note...this works but is not recommended if you care about your trees...
and is not advisable under any circumstances for BIRCH trees.
BAD.
So if you don't hear from me here for awhile,
I've drowned in my pictures and need to be dragged out, or I've gone up in a wall of flames from kids trying to burn toilet paper out of my trees.
Either way...not good!
Posted by Suzanne at 7:04 PM No comments: