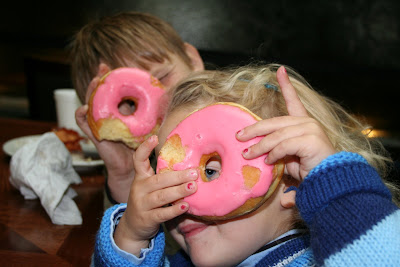 We took a four day vacation to Chicago over the MEA weekend last week. It was terrific! We left Wednesday from Andrew's LAST football game in South St. Paul (a searing loss to be sure) and arrived in the windy city about 12:30 am! As usual, I got the graveyard shift, and thus found myself driving the streets of Chicago, an experience I'd clearly stated I never wanted to have! But it was a good thing that I did, because I got the lay of the land around our hotel (Embassy Suites), which served me in good stead the next day since I ended up driving (in crazy lunchhour traffic) then too. Never say never! We enjoyed a fabulous breakfast just the kids and I, while Tim went to his CLE classes on Thursday. The kids really enjoyed the abundant breakfast buffet and cook to order options and ate so much and so well...it was fun to watch. It was great just to be together in a pretty setting and on vacation! 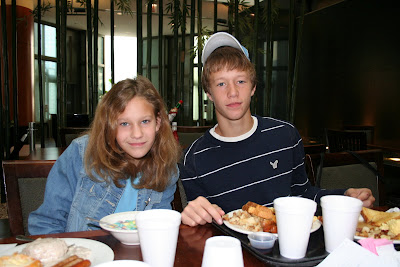 After breakfast, we hopped in the car and drove about 15 minutes to the Museum of Science and Industry in Hyde Park. I thought it was a cheaper deal than some of the other museums, but the truth is it was the same because we had to pay extra for the imax shows and to tour t 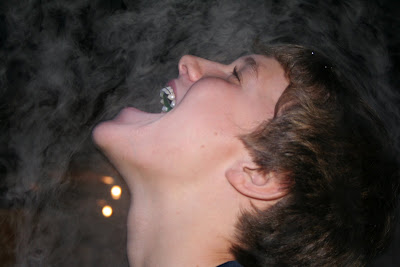 
submarine, so by the time that was all done, it was all about the same. But we enjoyed it nonetheless, especially the German WWII submarine and the mirror maze. There was also fun with the dry ice vapors as you can see. Ya gotta love dry ice. Since I had forgotten to pack a stroller and had been too cheap to rent one, we also had a very exciting time keeping track of Lily. The older kids were tremendously helpful; it's not easy moving as a group through a museum like that because everybody wants to spend time at different spots.

Having got there when it opened, by noon we were ready for some r and r. We went back to the hotel (a harrowing lunch hour trip), snacked for lunch, and then while the boys hung out and waited for Tim to get back, Katie, Lily and I took off on foot to meet Joy,a roommate of mine from college whom I haven't seen for 15 years, and her four girls at...you guessed it.. 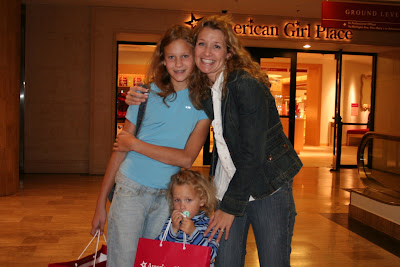 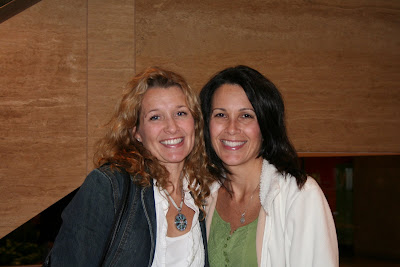 It was so much fun to get to watch all the girls enjoy putting their "wish lists" together. Katie had brought her savings along, so she opted to buy the Samantha doll since that doll will soon be "sent to the archives" which I think is a perfectly horrible sounding way to say that they are going to stop making her. It sounds like they are locking her in the attic or something.

Joy and I visited as best we could while keeping the six kids in one place more or less...the worst was Lily, of course, especially in the Bitty Baby section. She brought her Bitty Baby, which she calls "Baby Baby" 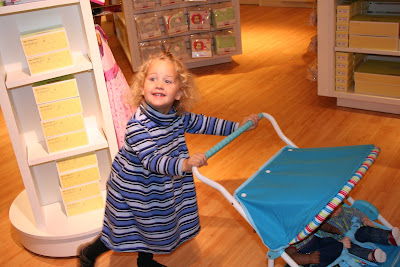 
in a carrying pack, and I didn't think we were going to get her out of the store! The stroller with the twins in it which you see her pushing here is now number one on her Christmas list. She was pushing it around like it was her own. They certainly know what they are doing in that store...it's a marketing extravaganza to be sure. We ended up leaving with only a Felicity movie because I think the first doll I will buy Lily (not at this age, though) is Felicity. For now, though, I think I'll get her some of her own Bitty Baby clothes since all the ones we have are Katie's and she keeps them all organized and nice. 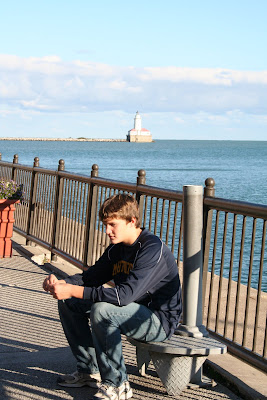 Then we all took off for Navy Pier where we met up with the boys who'd spent the latter part of the afternoon putt putting. We walked around, rode rides, and enjoyed the fresh air with Joy and her family. A beautiful day! 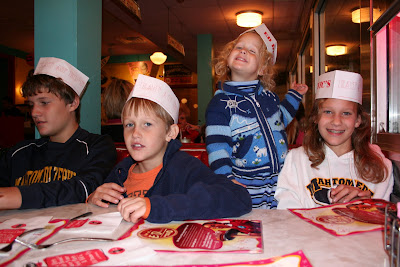 Ed Debevicks for dinner, where Timmy was nicknamed "Little Nerd" by the waiter. Zach took the name "Big Nerd" so that Timmy wouldn't feel singled out. The food was awful, the bill was high, but the memories are great! 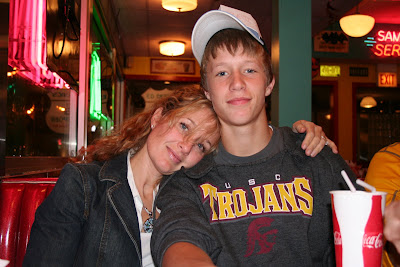 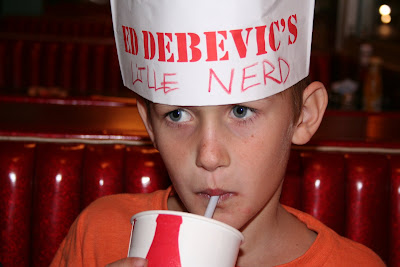 No explanation needed.
And that was the first day.
Posted by Suzanne at 2:16 PM