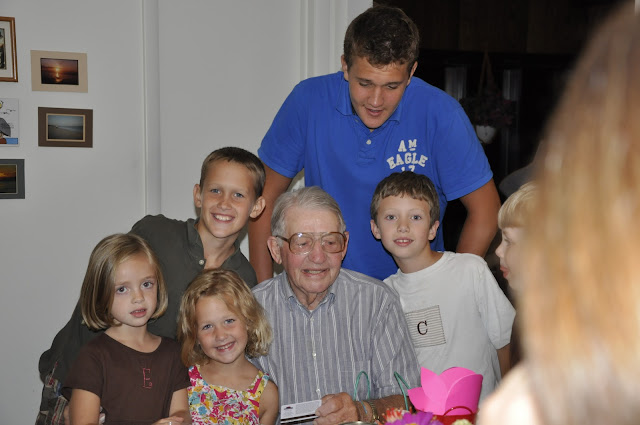 Here are a few of the party animals! 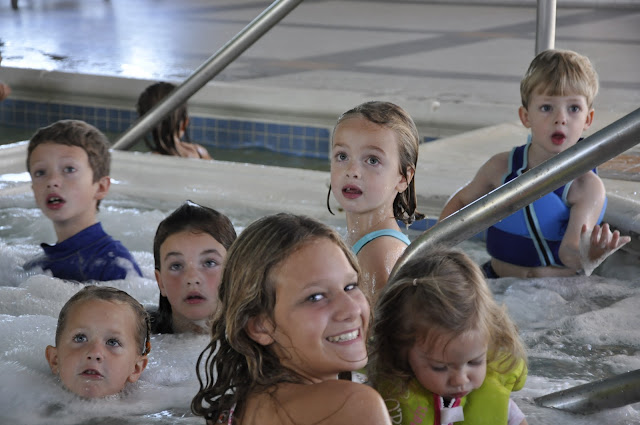 Then we let the kids have a pre-lunch swim before we checked out of the hotel...
The question was...WHAT to DO for a few hours before we Lindquist's had to head back to Minnesota.  We had until 3:00.
It's so seldom that the cousins are all together.
Whatever we did, it had to involve
a.) Lunch
b.) Football
c.)  Time Outdoors...did I mention we were from Minnesota?
So my suggestion was New Salem, a reconstructed 1800's village where Abraham Lincoln (we were in Springfield, IL remember) spent part of his younger years.
I remembered it glowingly from childhood fieldtrips.
We went at least four times for fieldtrips because...it's free.
Free was and still is quite appealing.
Now understand that the remainder of this blog is going to include pretty much NO historically accurate information...unless it happens by chance.  We didn't even go in the museum.  Well, technically we did, but it was to use the facilities.... 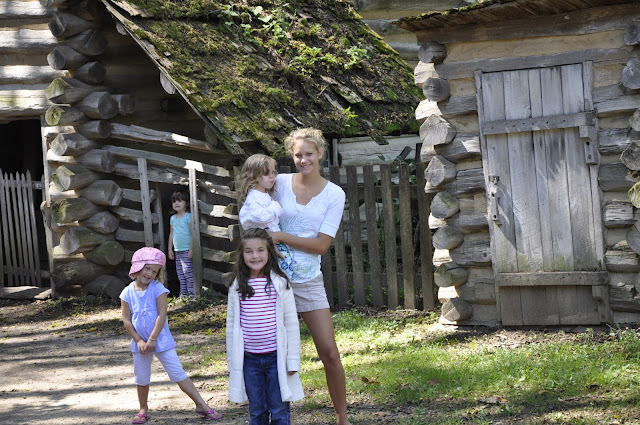 Right from the start, the camera came out.
Photo ops galore.
Front and center in the pink stripes is my sweet niece Ally.  She was THE most cooperative of the bunch, hands down.  Maybe it was because she was temporarily an orphan since her parents had detoured to a grocery store to buy us all a picnic lunch.  Lily doesn't mind a photo op either....
The hat is very 1840's! 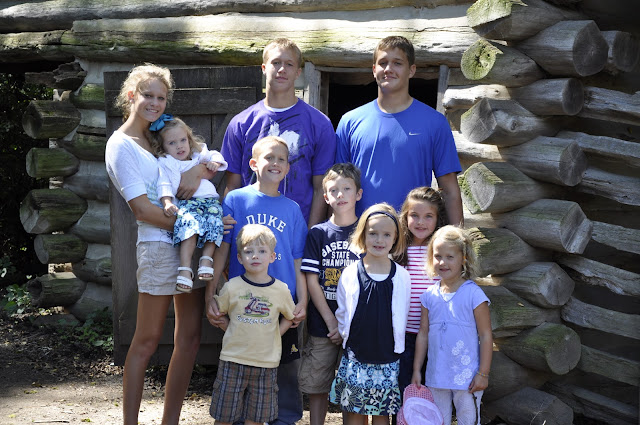 Oh how they love this.
My only regret is not having Katie wear a long skirt.
I'm sure Abe Lincoln's sister didn't wear shorts...
did Abe Lincoln have a sister?  Yes he did...but I think she died....Or was it his mother who died?
OK THEN....Moving on.....
We'll ask Ally or Sam (standing next to her) to clarify the point for us later. 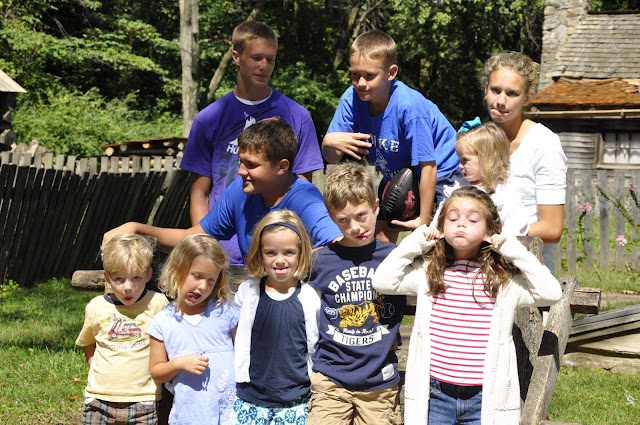 I think this was taken in front of a well.
Not that it matters much with ten kids.
Very little matters when you are dealing with 10 kids in a photo.
Facial expressions were varied.
This is the shot they wait for!
Andrew endures. 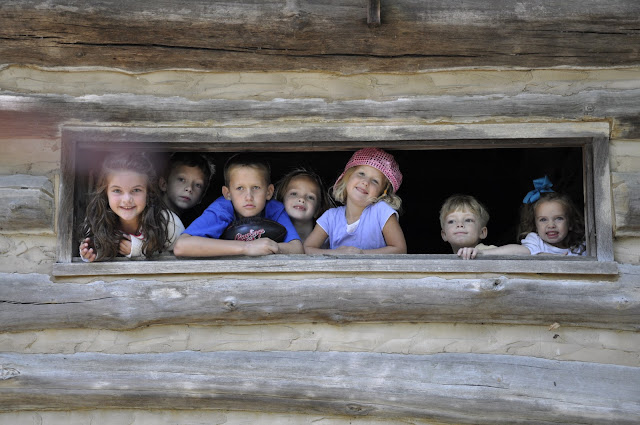 Here's a schoolhouse full of hooligans.
I love looking at the differing expressions on each of their faces....
differing attitudes about school perhaps?
What's that? You want to know where you can get a hat like Lily's?
MINNESOTA STATE FAIR, BABY.
$7!
Pink sequins included!  One size fits all.....all who would want to wear it anyway~! 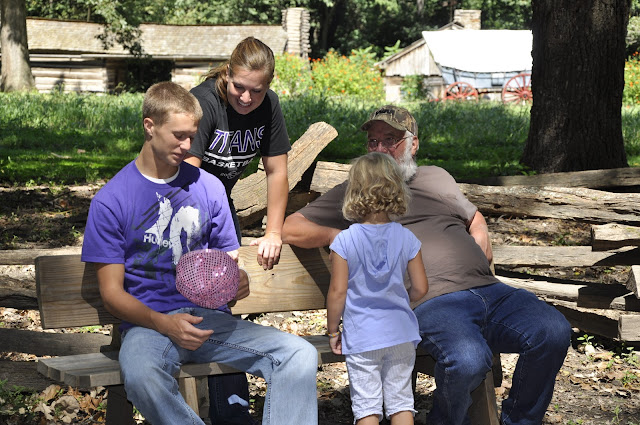 There are about 20 or more houses, barns, smithy's, stores etcetera, etcetera that you could go into.
These guys were on the selective end.
Veerrrrry selective.
And Andrew endures... 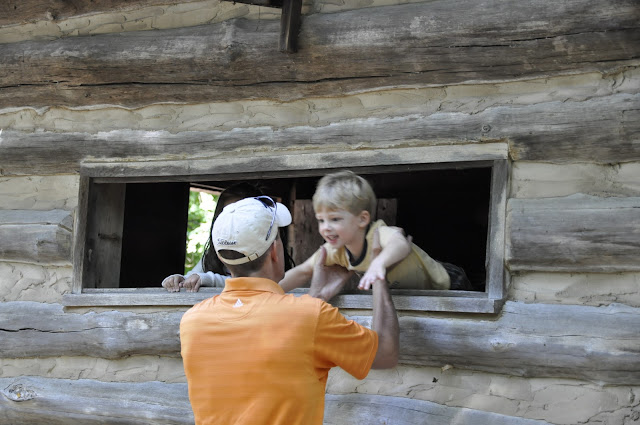 Tim:  "Here Josiah!  This is how Abe Lincoln snuck out of school!! 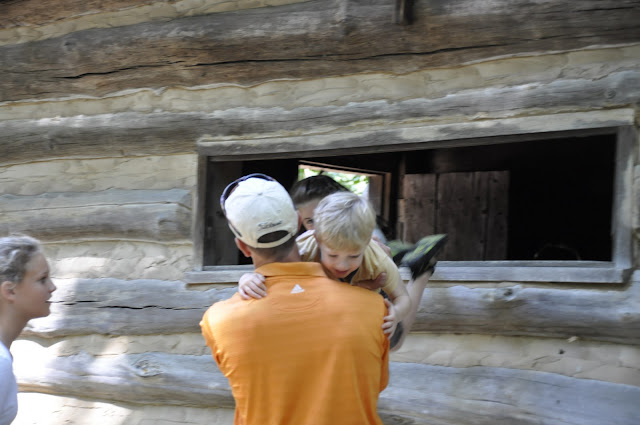 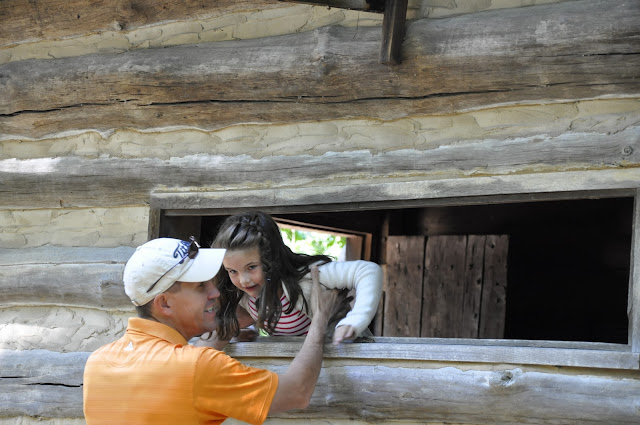 Ally:  "You mean Abe Lincoln jumped out the window to get out of school?" 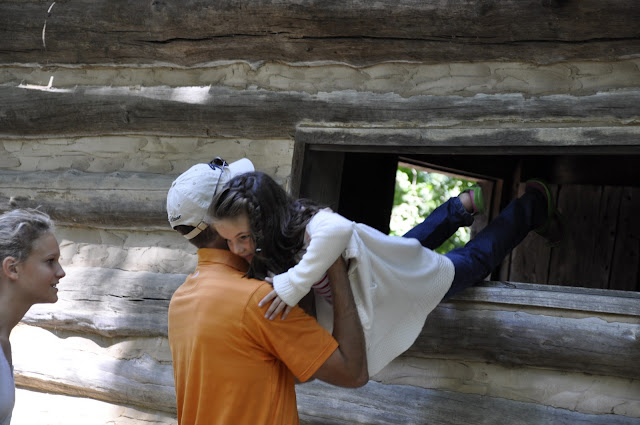 Tim:  "OH Yeah! He jumped out the window this way all the time!" 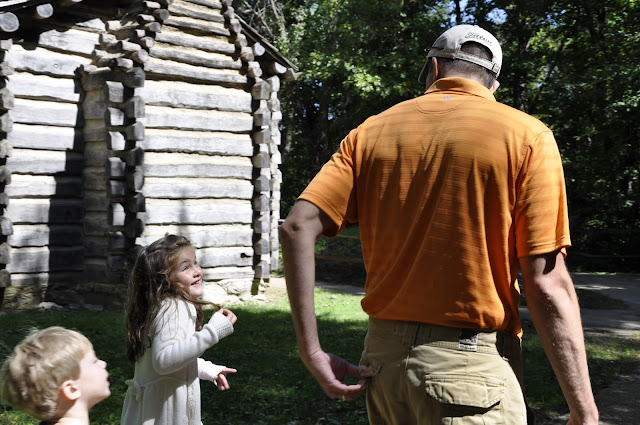 Ally:  "UNCLE TIM!  Is that true?  Because what I don't understand is,Uncle Tim.....WHY would anybody WANT to leave school?"
She's not quite used to our ways.
And she apparently likes school.
Which may both be good things. 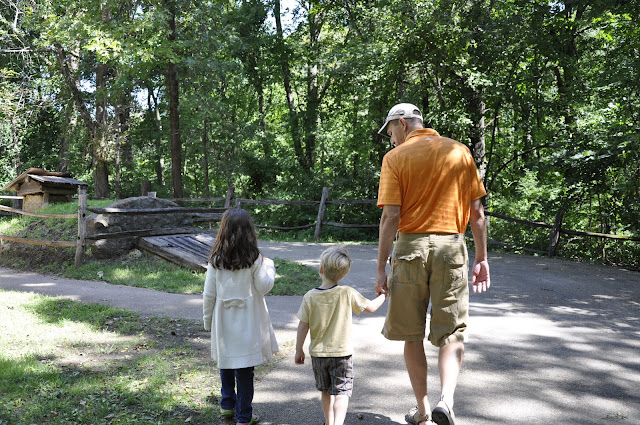 I think Josiah got it though. 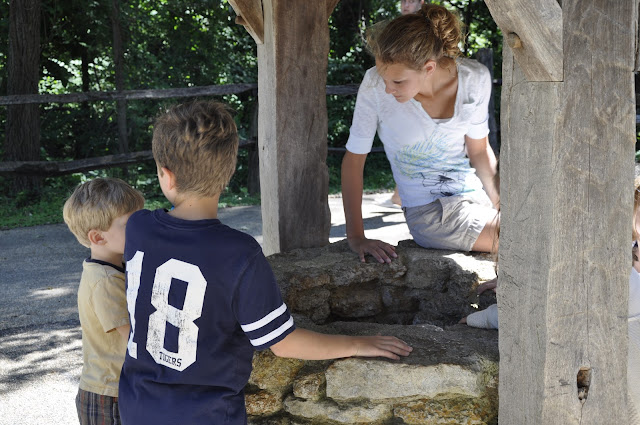 I walked up on this scene at the well....
"WHERE'S THE FOOTBALL?" 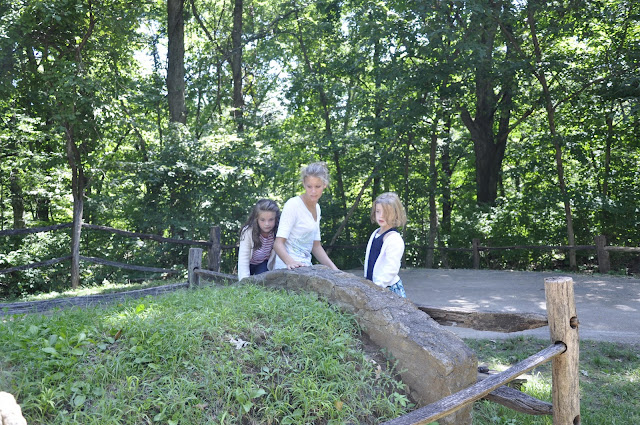 Katie:   "And this is where they buried the little children..." 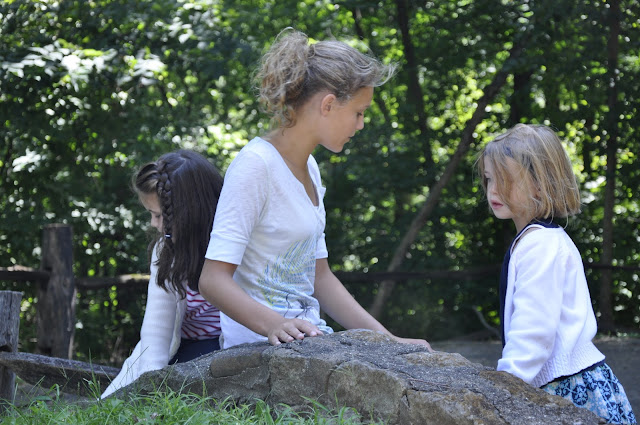 JUST KIDDING....it was a storage cellar.
At this point you might be thinking that we Lindquist's are being a little rough on the younger cousins.
Well let me tell you, when Andrew, Zach and Katie were little, my brothers (the fathers of these adorable children) were in college.  They gave my boys knives for Christmas.  OR was that Tim's brothers?  They loaded them up on pop and watched them spin.  They installed war movies on secret hard drives on our laptop....
And now they were both gone....Jess, sadly on tour in Afganistan, and Tim at the grocery store.
I would never get this opportunity again. 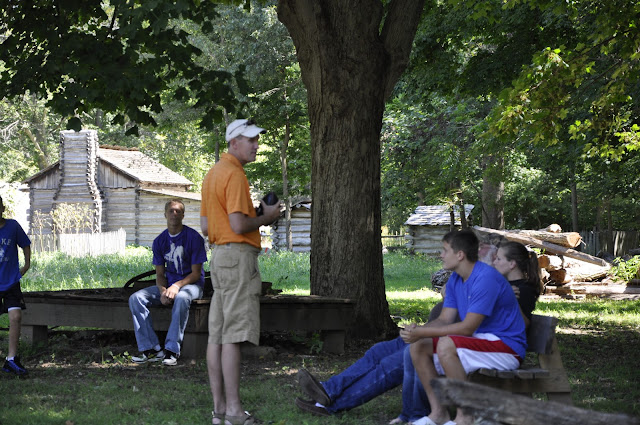 Notice the football.
Abe Lincoln's favorite sport was football.
This was the very field he practiced on.
These were the home benches.
And Andrew endures. 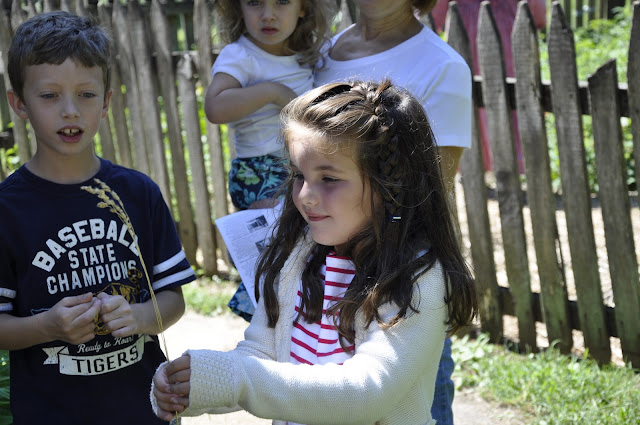 Ally and Sam went in every building.
Here they are learning how to make straw brooms.
I am sure they each made one the next week at home. 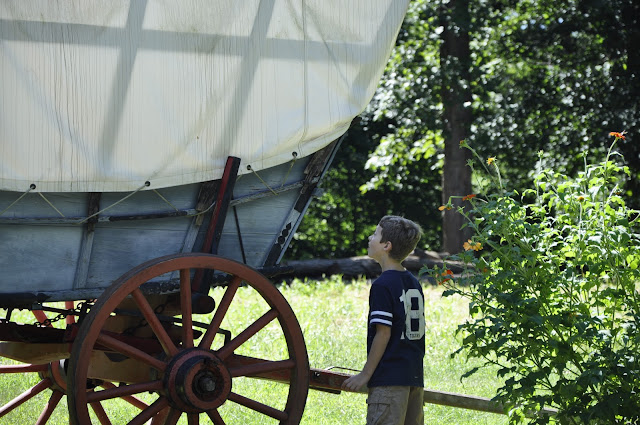 I love watching kids explore, and learn and ask questions...
Here's my nephew Sam again doing just that!
What?  Where are my kids? 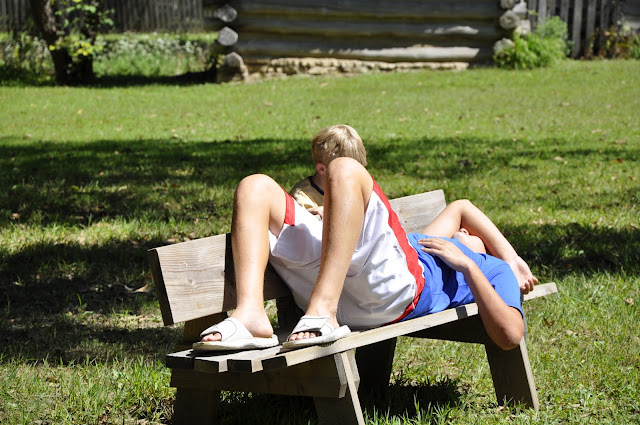 "Zachary?  ZACH-A-REE?  Don't you want to go into that mill over there?  It's really cool!  There's a guy there explaining how it all works!  Zach?  Zach? The mill?"
Ladies and Gentlemen, THIS is the bench where Abe Lincoln often indulged in a mid afternoon meditation.  Here you see my son Zach taking a moment to tap into the historical spirit and significance of the place where the future president mulled over various political philosophies.
Also, he (Zachary not Abe Lincoln) was supposed to be watching over his cousin Josiah...
Jess, you can stay in Afganistan.  We got it covered.  No worries. 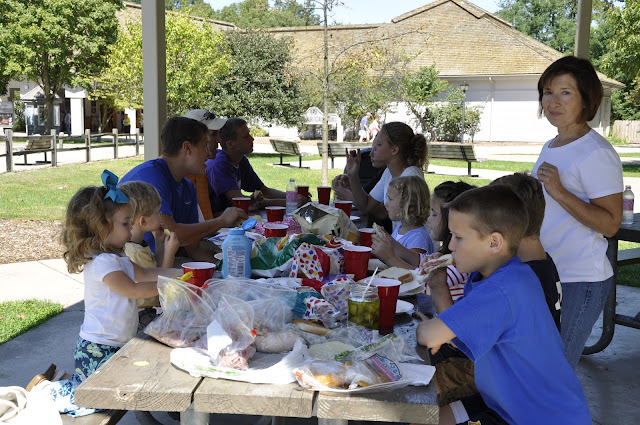 And a fantastic LUNCH was had by all.
THERE'S  MY KIDS!
Timmy would have been VERY interested in touring all the historical building except for the fact that we brought a.... 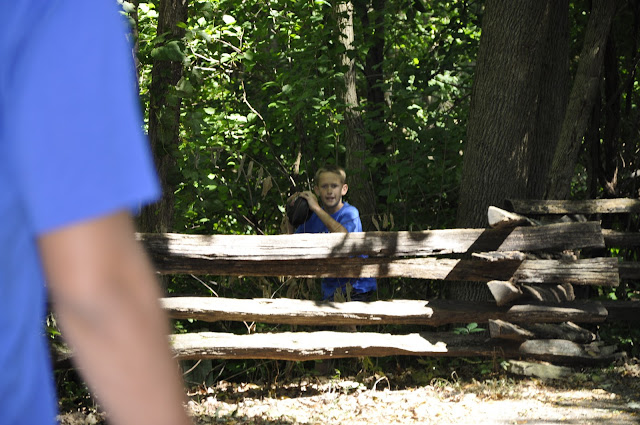 FOOTBALL.
Um....that is the woods where Abe Lincoln often got poison ivy...and lost many footballs.
Luckily we were able to get ours.
Very historical. 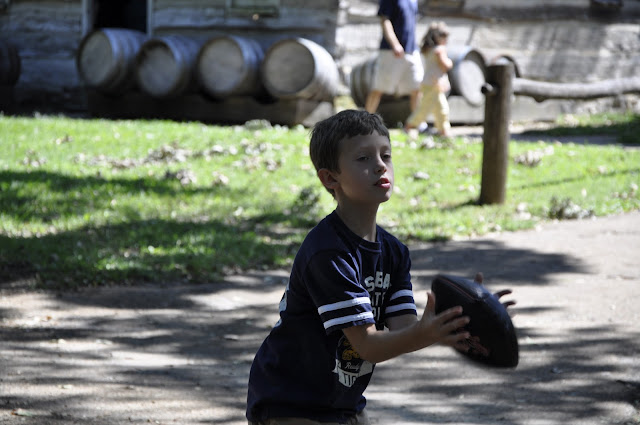 AND.....HERE"S SAM...
...corruptive process complete...
....fooooottttbaalllllllll....
Poor Ally was left to tour on her own.
This happens in males.  There is a "football gene" which, once triggered by close proximity to another male playing with a football, releases an explosive metabolic and cognitive series of events in the brains and bodies of elementary age boys.  Once triggered, the boy is thereafter predisposed to choose playing football over almost any other valuable activity.
I've seen it happen over and over.
Sam....welcome...welcome to the dark side. 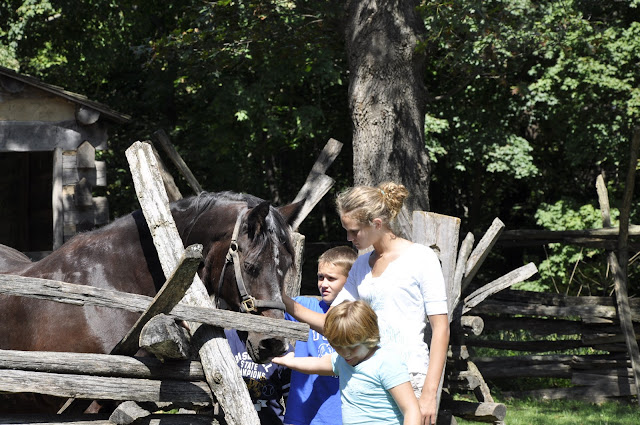 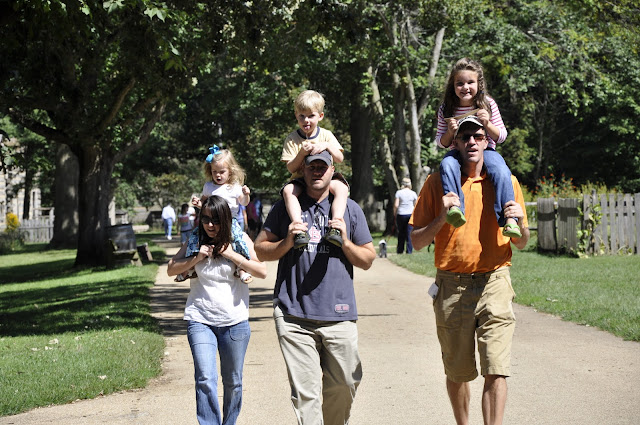 Oh..there are the missing children.  We only thought they were missing, but indeed they were with responsible adults the entire time.  Whew!
And Ally is back in the protection of both her parents who will, I am sure, soon correct any misinformation about Abe Lincoln which she might have picked up from us! 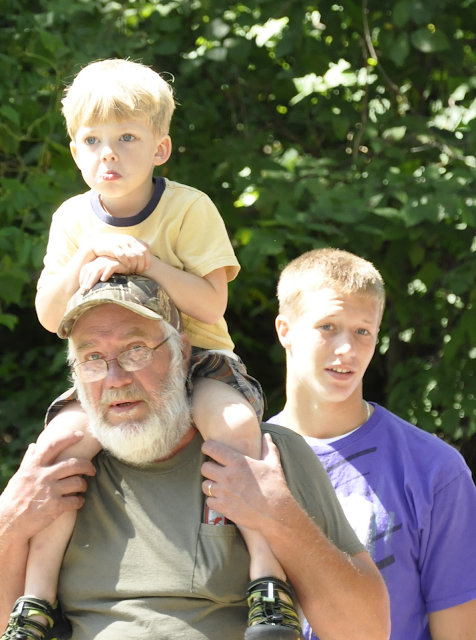 And Andrew Endures...NOT.
Now this is the "OVER" picture.
...the "End of Endurance" picture.
...the "Please Move Toward the Exit" Picture...
the.... well you get the picture.
By the way...have you ever seen a cuter face than Josiah's?
The lower lip.....
I don't know how his mama can stand it!  He'd get away with anything with me, I can tell you!

So departure was emminent... 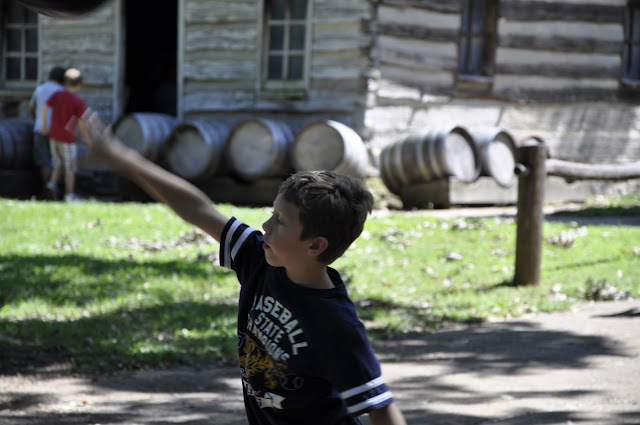 But we made sure to fit in a few long passes before we left Abe Lincoln Field!
The clincher will come when we give Sam a bonafide Mahtomedi football for Christmas.
Yes.
Stay tuned tomorrow for the dramatic goodbye.  Even enduring Andrew tears up....maybe...

hey your blog design is very nice, clean and fresh and with updated content, make people feel peace and I always enjoy browsing your site.

Ally HAD to show me the window where Abe Lincoln used to sneak out of school and I actually thought one of the "tour guide" actor people told the kids that. I fell for it. I think I enjoyed the Tim Lindquist tour guide visit much more than any of the visits in my youth! =-)
Great pictures of a great day!