Ya know...you get all upset about the little drips of paint in your life, but then some Sunday afternoon, somebody knocks the whole bucket of silver metallic paint on your white carpet....and you laugh...because what else are you going to do? Here's our white carpet, and here's about 1/2 a quart of metallic silver paint! 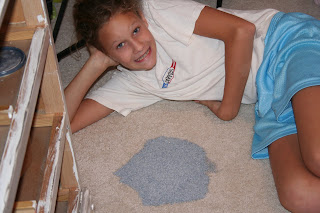 Somehow...I'm never sure how this happens....I found myself doing a room makeover for Katie this afternoon... this one is worthy of HGTV....we decided that along with "Key Lime Pie Green" walls, metallic silver would be just the thing for her three large pieces of furniture. "IT'S A DISASTER FAYE!!!! ("What About Bob") The paint was SO drippy, and transluscent-- I found out later when I read the can to see just how many coats it was going to take. We dripped everywhere, and I was having a heart attack each time...that was until "someone" whose room we were redoing, knocked over the can. There was nothing to do but laugh and put a basket over it so that we wouldn't step on it! The dresser was so bad that we ended up scraping off the half dried paint and trying again....this is what it looked like: 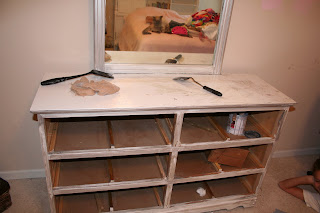 Like I said....not good. I told her we're only doing the dresser!

So then I moved on (while waiting for the umpteenth silver coat to dry) to painting the trim on all the walls. (I said thanks but no thanks to a bucket kicking assistant on this one.) So after a couple of hours of trimming, Katie came in and said she didn't like the color because it was too babyish! "Babyish," I said!!!! "NO NO NO...THIS color reminds me of lime sherbert...it's even CALLED KEY LIME PIE and I KNOW you LOVE KEY LIME PIE!"
"I DO!" she said...."I LOVE key lime pie!!! Mom can we make a key lime pie right now???"
Well, anyway, she decided she liked the color....and it is pretty yummy.

Andrew decided, since it's DUE tomorrow, that he'd better construct his water bottle rocket! So while I'm having the paint disaster, he keeps calling me in asking me how to build a water rocket!! (which I have NO idea about!) THEN he mentions he has a partner for this! This was great news, I thought! But when I suggested Andrew get his partner over here, he said that no, he'd told his partner ("Bo"), that he'd just take care of it!

"You mean you told your partner "Bo" that YOUR MOTHER would take care of it! NOT! "

"Come on Mom, just help me. It's easiest to just do it myself. I don't want to call "Bo"

Well, I left him at this point, and although he still doesn't get the concept of "PARTNER," he did put together a pretty nice rocket WITH a parachute! Here are the pictures of that!

And THEN, just because there wasn't enough chaos and because he felt like he should be doing something, Tim decided to rake out and CLEAN Timmy and Zach's disaster zone of a room. 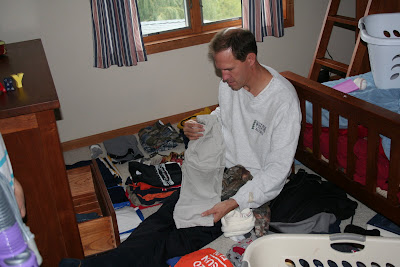 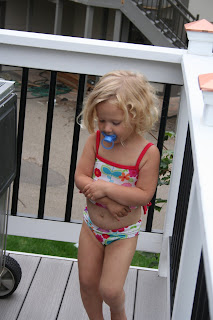 All the while Lily coped with the circus by trying on all her swimsuits (despite the 60 degree temps) and trying very persistantly to get me to paint the walls purple instead of green!

I will be keeping you all updated on how Katie's room makeover turns out. And I have no idea how I'm going to solve the carpet problem, but I'll think of something...... At least it's not as bad as the time Zach was sleeping on Mari's floor (this was long ago), and threw up red kool-aid all over his pillow, flipped the pillow over and went back to sleep until morning! Some things are just funny every time you remember them!

oh my goodness! What a day! I can't wait to see how it turns out though, it sounds BEautiful. The walls, that is, not the carpet. My friend just did the exact same thing with bright yellow. She used nail polish remover and water. . . Good luck!

Sounds like a great day in the Lindquist home!! :) I love it!