Indigents are everywhere in Washington... check out these poor souls at the waste receptacles outside the very Capital Building of our country! 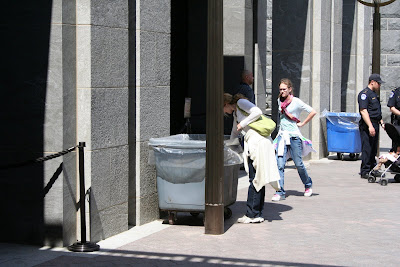 ...take for example this woman...clearly a bag lady(evidenced by the oversized bags clearly stuffed with all her worldly belongings and the extra clothing tied around her person), alone, hungry...so very thin...(JK!)...wait, it appears she has competition for the food in this garbage can... 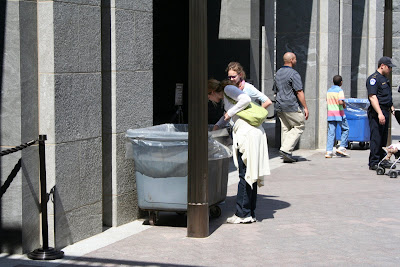 ..a youth approaches....just a young girl really...but look how the old bag lady shoulders her off...like a lioness protecting her kill... 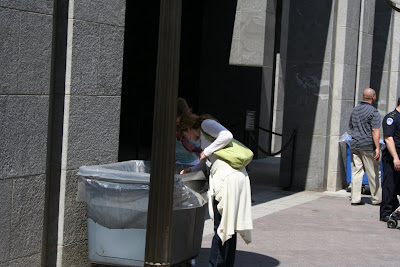 ...wait...no...it appears they are working together...she's letting the young girl join her in the trash bin forage.... 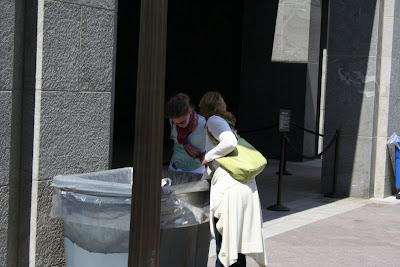 the young one evaluates while the older woman checks to see if the guards are watching... 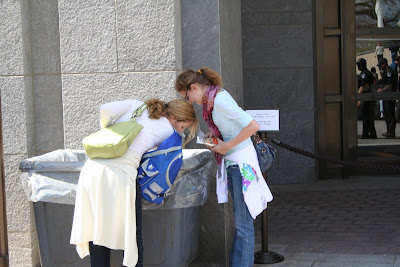 Disclaimer: What you have seen and are about to read is an instance of me (Suzanne) behaving badly. I acknowledge my forthcoming decision was wrong (funny...but wrong) and have repented to my God and my family, although restitution in this case is difficult.
It was a gorgeous morning as we walked up out of the metro system onto Capital Hill about 10:00am. The day couldn't have been more perfect. Being that it was our FIRST day of sightseeing, legs were still limber and spirits were high! We had planned the day out perfectly, with a prearranged tour of the Capital at 11:20. I proudly carried my family's survival supplies for the day; I was armed with a purse and backpack filled with band aids, ibuprofen, hand sanitizer, tissues, sunscreen, chap stick, insurance info., gum, allergy medicine, camera equipment, a football (well, yes!) and..., of course....high energy foods and water. I figure I was packing at least $20 worth of trail mix, granola bars, Slim Jims and waters...being the first day it was the pick of my stash!

We toured around the Library of Congress and the Supreme Court for an hour or so until it was time to report to the Capital Building for our tour. As we approached, I noticed about five guards spread out in front of the entrance next to at least three large square plastic lined garbage bins... I wasn't surprised...we'd already gone through security twice in just the last hour. This time, however, was different....and WRONG! They were not letting ANY food or water into the building....NONE!..not an apple....not a water bottle...NADA. I couldn't believe it!
The whole purpose of me hauling this food around all morning was to save money,and here they were going to make me throw good money right in this garbage bin! I tried to get around it...offered to pay for a locker....nothing doing. Tim was already ahead of me in the building..."patiently" waving his arms and making faces at me through the window...not understanding what the hold up was, of course. I would have sat the kids down and force-fed them everything except that we were already five minutes late for our tour....no time for even a bite...
So I placed our precious food carefully upright in the nearest corner of the bin.
Then I looked that guard right in the eye, squinted and said, ..."I'll be back."

I was mad! We went in, got signed in and THEN had to wait for 20 minutes before we could line up for the actual tour! "Mom...I'm thirsty....Mom...I'm hungry..."....it was after all 11:30 and we'd been going for awhile..perfect time for a SNACK!. LUCKILY (since they stole our food), there was a cafeteria....and just enough time for us to PURCHASE a bite and sip. Here is what TWENTY DOLLARS of Lifewater and a couple pieces of fruit looks like, my friends: 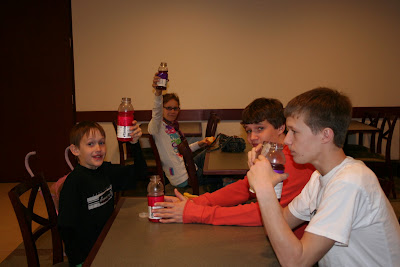 All of this background information is to justify what comes next.

So we toured the Capital...it was a so so tour...the coolest part was seeing where the House of Representatives meets, but they don't let you take pictures there...so here's the rotunda ceiling just to prove we were there: 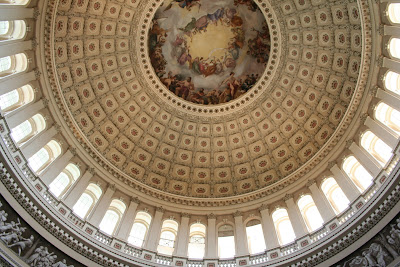 Then we exited the building.

"You're not really going back, are you Mom?"

"Absolutely I am! I made a special trip to Target to get that food and we're going to eat it!"

"We are NOT going with you!"

I decided the best thing to do, after my bold declaration to the guards an hour and a half earlier, was to AVOID ALL EYE CONTACT ..."make 'em come to you"....

So I approached the bin with my head down, quickly realizing that A LOT of "garbage" had gone into that can since we'd been there. Yes, I dug. There was our unopened bag of trail mix right where I left it, under just a couple layers...but after digging around for longer than I liked, I came to the conclusion that SOMEBODY had TAKEN our Slim Jims and Kashi Pumpkin Flax Granola Bars!!! The nerve! Then I did that of which I am now ashamed....There it was...an unopened bag of premium beef jerky!...and another of BBQ potato chips !...and water bottles with the wrapping still on them!... clearly we weren't the only ones surprised by this forced waste! By this time Katie had joined me, good girl...and then Timmy came too...while their siblings and father were somewhere taking embarrassing pictures...

Yes, we took the beef jerky...and the chips...and the water bottles...

And we ate them....ate them with relish! I fed contraband to my family. It was only after our bellies were full that I felt the guilt that there were probably hungry children whose mothers were even at that moment rooting around in the garbage looking for that expensive jerky...thirsty little kids...hungry families.

Now not wanting to throw me to the wolves, especially after eating all the yummy loot, my kids declared that taking out of a garbage can is not stealing. But I disagree....this was an unusual situation where cash-squeezed parents were being forced to "throw away" unopened food, and surely there had to be many others like me who were going to come back and get it...therefore, it was wrong to take it, especially after my hypocritical anger at having my food taken..."Two wrongs don't make a right" and all that.

So world, I am sorry. If I had to do it over again I'd make it a lesson to my kids and we would just suffer for righteousness. But it did taste really good...and in my children's opinion, beef jerky and Mesquite Kruncher Potato Chips were a real upgrade from the pumpkin flax granola and Slim Jims. (I think I agree.) So along with my apologies to the moms who made special trips to Target to get such great food which we then stole, I add my thanks for picking out such nice stuff.

Just to satisfy my curiosity....OK, to prove I'm right to Tim!....how many of you would have gone back? Pertinent facts: the bins were freshly lined, people around us were throwing in lots of unopened food, it was fairly early in the day so the food was fresh, ...

I love this story! What we would do and have done in the past as most building don't allow cell phones with cameras is one wait out with the bags and then the next go in. I could not reach the bottom of the garbage bin as I am too short, but maybe would have thought of it.

I would have gone back but Suzanne you should have labeled it, "NO SNARF!!!!!" Ann Gupta

I would definitely have gone back to get my Target Treasures! I probably would have climbed right in there and Michael with me! AND I think I would look at it as a “Pay it Forward” kind of system they have established in D.C. Your food went to another hungry family whose Target Treasures were consumed by the a previous hungry family. So, no harm done. I bet those guards get looks from a number of moms who have brought food to “save their starving children and are told to dump them only to see another mom jump into the dumpster. Boy I think I’d like to sit outside of that place and watch it all go down. Thanks for sharing Suzanne, now I know the drill.

Great story. I would have taken my food back in a hearbeat. Especially since it was unopened. We've had this type of encounter when we've gone to the metrodome lately. Although they are a lot more strict at Gopher games than Twins games. I've had to throw food away too. I wonder what they will do when someone who truly needs the food (diabetic, food allergy, etc.) has a breakdown in the middle of the place and they have to call 911. JMO

well written! that is awesome! i don't know if i would have gone back. but probably. no! most likely! you crack me up!