Traveling With The Fam to Punta Cana, Dominican Republic

As you can clearly see by the unscarred, unburnt,
Scandinavian pale skin,
these pictures were taken on the way TO the Dominican Republic,
not on the way home....
In case you've ever wondered what it is like to negotiate international travel with a modern
(read technologically armed)
family of seven, here's a glimpse: 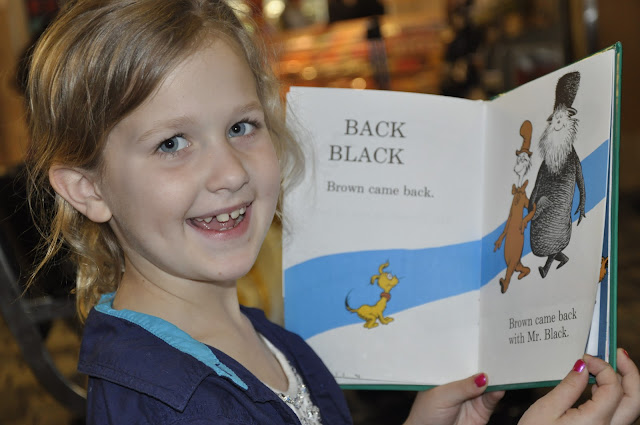 Dr. Suess's Hop on Pop
You can never go wrong with the old paper version...
it may weigh a little, but there's comfort in those pages,
a taste of normalcy that an iPad or Kindle version can't provide.
There are a lot of quotes in Hop on Pop that can be used in family travel situations. 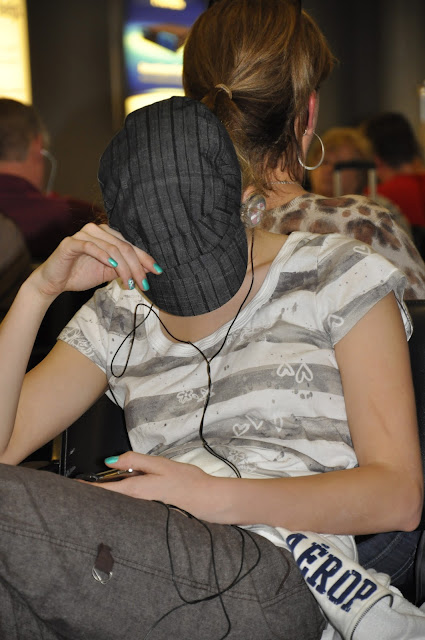 Here's the picture of the classic teenage traveling specimen.
Please excuse the appearance of the lady on the other
side of the chairs seeming to grow her head out of Katie's body.
I'm just an amateur.
And as you can see, the point of this picture was--
Katie didn't like me taking her picture,
so asking her to shift to the chair on her right  to avoid the two-headed monster effect
was really out of the question. 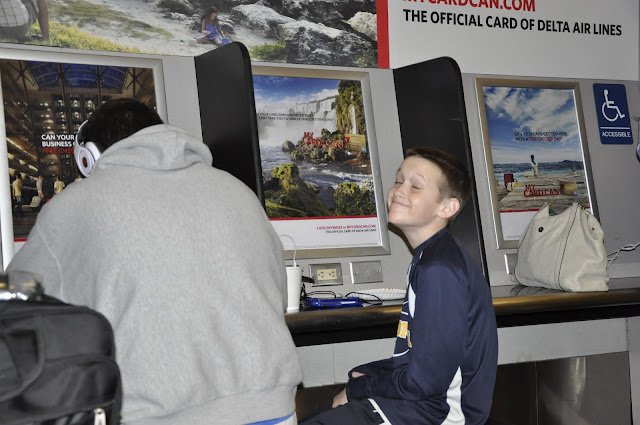 Minneapolis Airport is marvelous.
It has more restaurants than anybody could imagine and more on the way.
Plus there are electronic device charging kiosks and desks in abundance.
We bring our own "hotspot" internet source
so we can be wireless without paying for the airport wireless.
It's very handy. 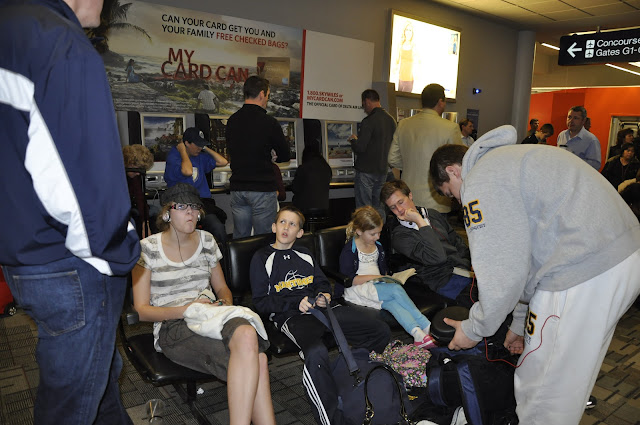 Instructions are given before everybody takes off to explore (i.e. eat) while waiting for our plane.
Due to the size of our family, we simply have to get there early.
I like getting there early, ok? 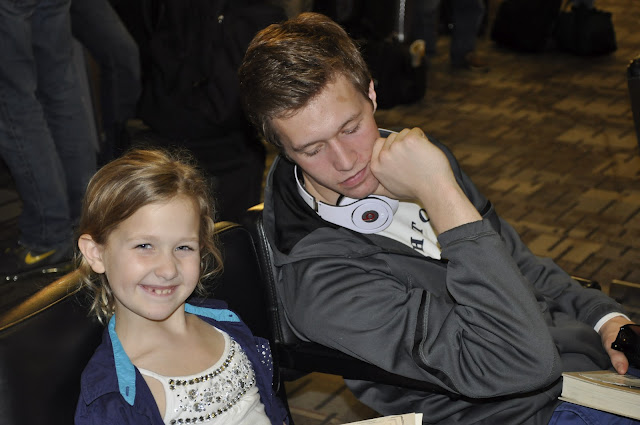 Andrew brought his Kindle, but still a "real" book was in his hand most of the time.
Some books are worth their weight.
Here he's saying, "Lily...do you have anything to eat in your bag?" 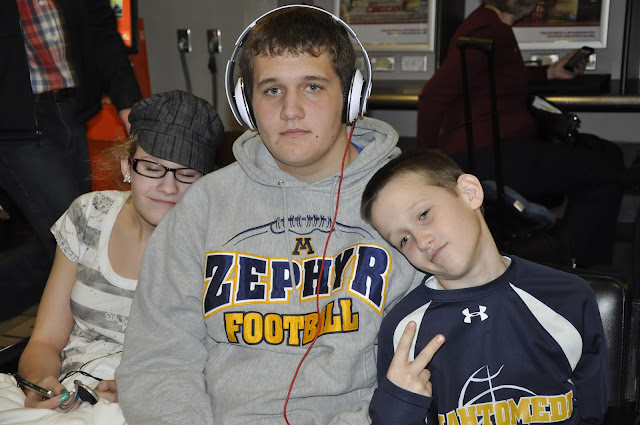 Don't forget the headphones!
These are a blessing and an annoyance.
The thing is, the person wearing them can't hear you when you say, oh, something like
"the plane is boarding now...you take the blue bag..."
...but they will always nod at you like they hear you loud and clear because otherwise you might tell them to take off the headphones....
In order to fly on frequent flyer points, we had to have an overnight in Atlanta.
Our hotel was right by the airport, and we were able to use up some free vouchers.
We are very pleased with ourselves about this!
Tim and I decided to have one room to ourselves and put the kids in the other room
(it was a suite). 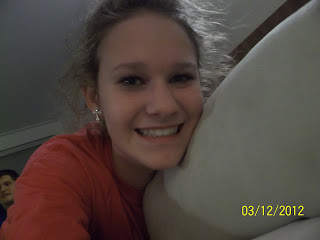 They were pleased with this arrangement as well.
(The pictures with yellow dates were taken by Katie's underwater camera...) 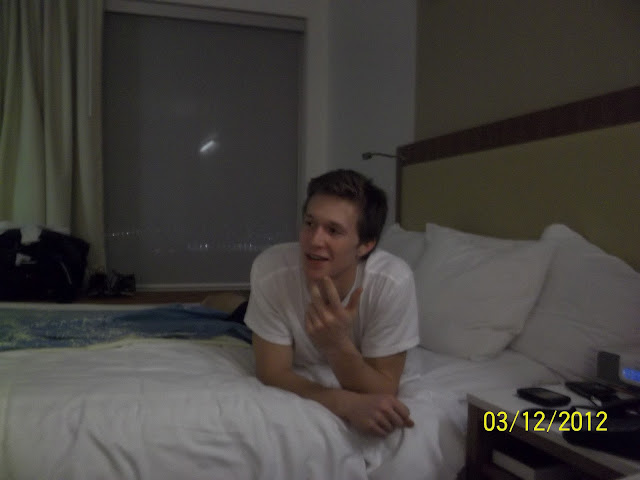 Here's the ringleader and man in charge. 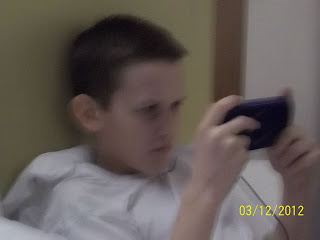 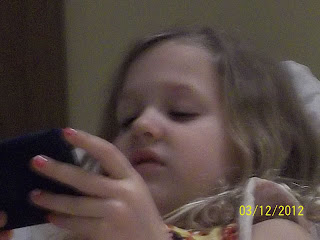 Everybody had a device....
and of course the first thing they did once the door clicked shut was... 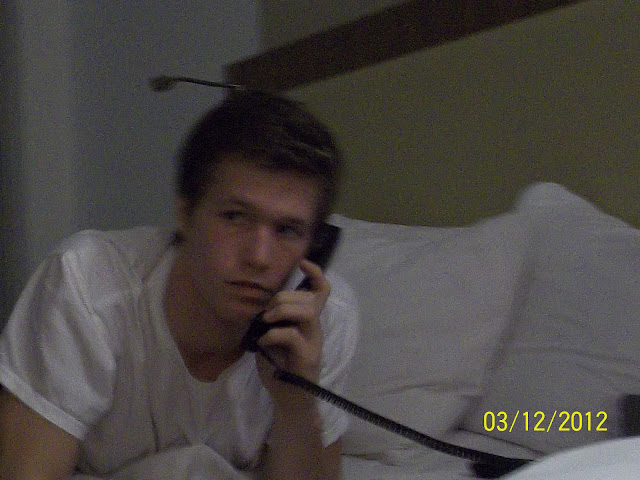 order food!
Pizza and chicken wings were on the way up!!! 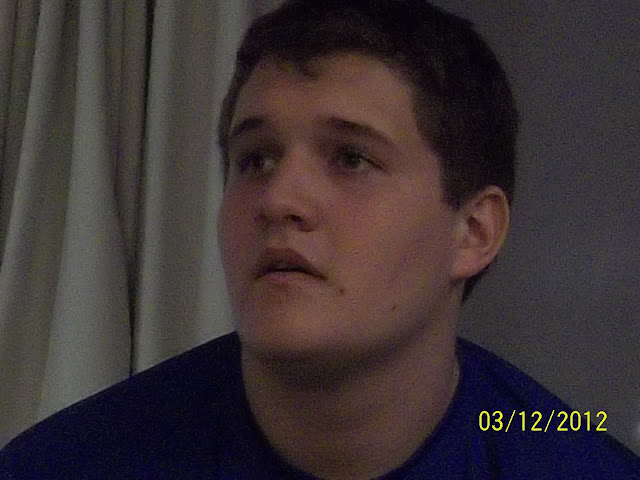 "Wait...how are we going to pay for the food?"
"I think you have to pay for it or something."
"Hey Lily!  Did you bring your wallet?: 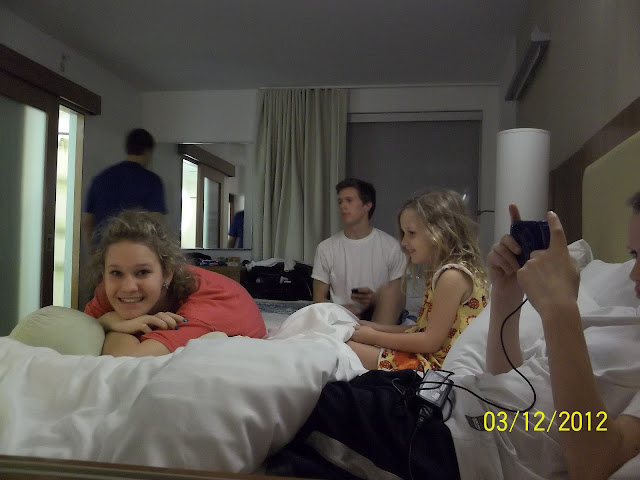 Yes...they used Lily's money to get room service.
She's rich.
She's easily persuaded.
She asked for reimbursement from me first thing the next morning.
With interest. 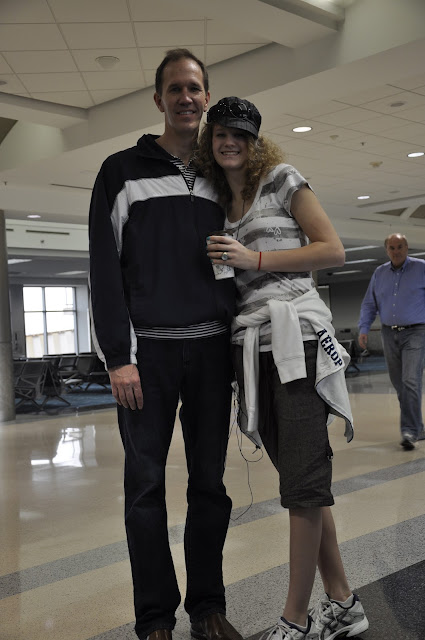 The next morning, back to the airport!
Did I mention our tickets were cheap? 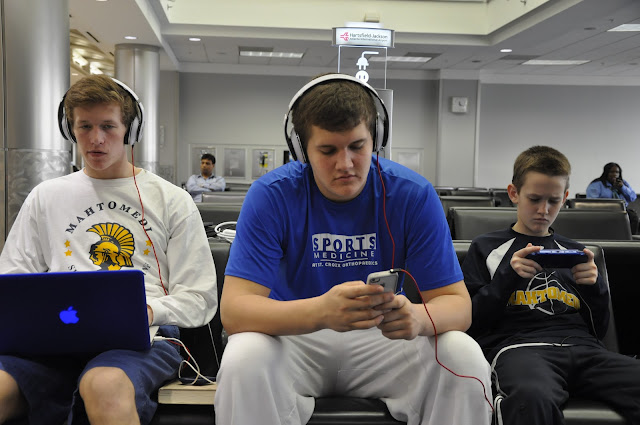 Out came the equipment! 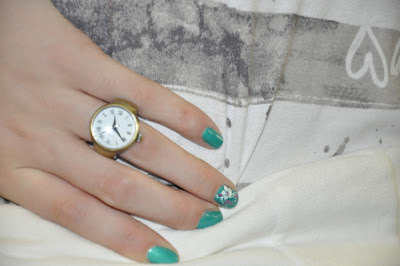 An aside:  notice the nails--
notice the ring--
very fashionable. 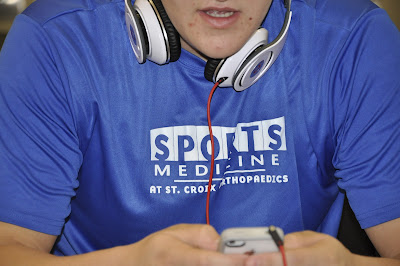 Here is Zach working on his brackets.
March madness began to set in with a vengeance. 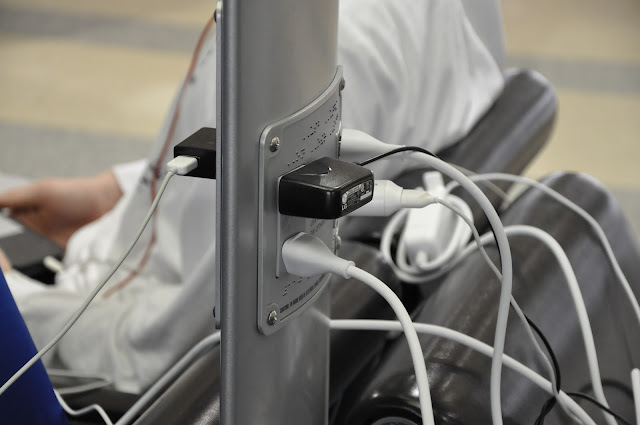 At airports, it's all about security--
security of  your territory that is!
It's important to stake out your charging territory right away.
These are all ours.
If anybody approached with a cord in their hand, we gave them "the eye."
*************
After a quiet peaceful ride, we arrived at Punta Cana.
Our first reaction was : "it's hot"
Our second was : "it's green"
Our third reaction was:  "why do our phones say roaming?"  We should have addressed that one right away.
Note:  If traveling with your family and  you all have cell phones, power them down and lock them away when you leave your country.  It appears that "roaming charges apply"....times six.
Ouch! 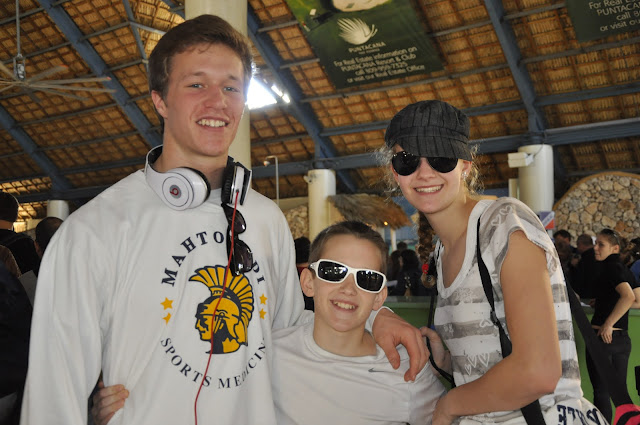 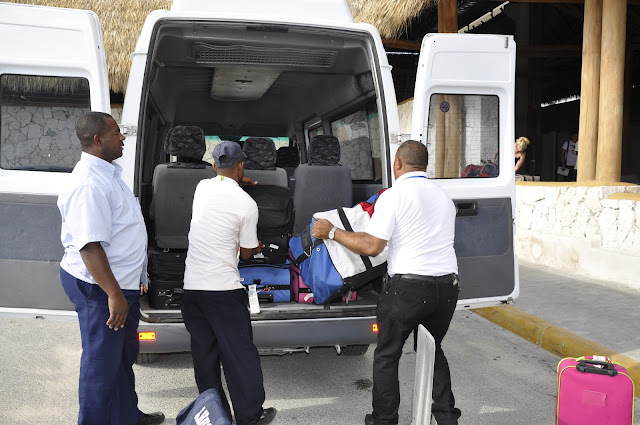 So many men ran off with our bags...it was quite disconcerting.
ANOTHER NOTE to travelers:
Just say no.
You'll have to say it ten times.
Keep saying it.
If you are a party of seven and you have 14 pieces or more of luggage,
tend to them yourselves.
These guys are competing, and one will take part of your luggage and another take another part of your luggage, and you will feel very stressed.
You've made it this far without help; make it a little further. 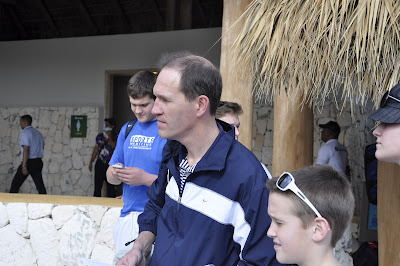 If you don't, you'll stand there like this wondering..."what are the chances that it's all here?"
(Yes, that was foreshadowing.)
Unless of course you are in the background checking March Madness information on the internet, while roaming... 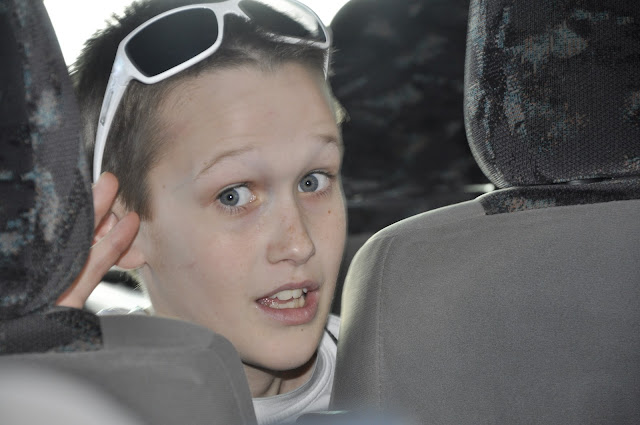 As we rolled along the road headed for the resort,
"Hey...do you think we have ALL the bags?"
(More foreshadowing) 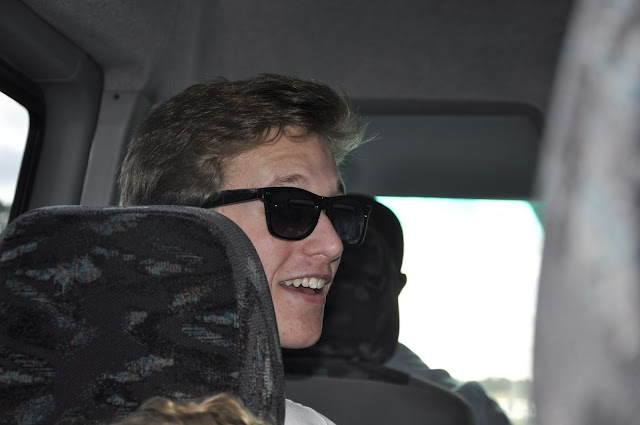 "No problemo man!"
This is the last picture you will see with Andrew's sunglasses.
An hour from when this picture is taken, he and I will be BACK at the airport  (with no tickets or passports because we couldn't find Tim who had all the tickets and passports...and despite many phone calls-- while roaming) looking for Andrew's red suitcase, and he will put the glasses through the x-ray machine and they won't come out but he will be too freaked out trying to find his bag and not get detained because we had no tickets and passport that he won't say anything and will go sunglassesless the rest of the week.
I dare you to diagram that sentence.
Does anybody diagram sentences anymore?
That was my favorite thing!!!
That's why I became an English major!
But even this one would be beyond me.
So we got there.
Not without incident.
Just a little preview.
Traveling with kids is fun.
Posted by Suzanne at 8:29 AM