After TWO FULL days of walking around D.C., going through no less than 15 security lines and generally rushing everywhere, we decided to take our third day and make it different. Normally, being crammed in a mini-van would appeal to my kids about as much as getting a tooth pulled, but we were so footsore that there were actually relieved sighs when they were told that the place we were going was AN HOUR AND A HALF away. "Seriously?" they said...but it was a good "seriously....as in "seriously we can just sit for three hours?" Timmy and Katie were ready to entertain us by reading the gift shop scroll of the Declaration of Independence (yes they really have them...and we had to buy two because apparently such a treasure cannot, I repeat cannot, be shared!) in its entirety....very interesting...those Founding Fathers had a lot of grievances.....
So with rain pattering down around us and making the Virginia horse farms we were passing misty and calm, we made our way to my very favorite of all the Civil War battlegrounds I've had the privilege to see: 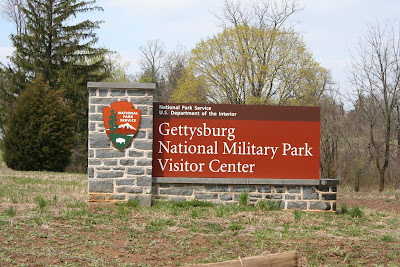 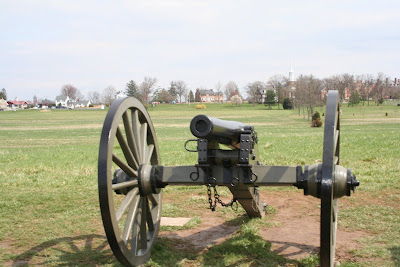 This picture is to get you in the mood! It was taken later in the day after the rain cleared off. 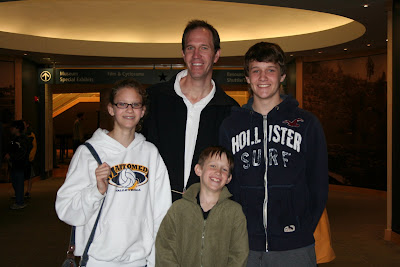 But while it drizzled, from 10:30 until 2:30! we contentedly browsed a fantastic museum all about the battle. There was a cyclorama, which is a huge 360 degree painting that is enhanced with lights that I especially enjoyed. The boys were interested in the battle and how it all played out, so we definitely got our money's worth at the museum...and it was good for my soul to slow down and enjoy learning some new facts about such a fascinating, tragic and pivotal three days in history.
However, after an unprecedented FOUR hours in the museum, we had a problem.... a serious problem. You see, nobody of Lindquist DNA can handle low blood sugar.... Timmy had eaten one of those sugar crystal lollipops, so he was fine...but... 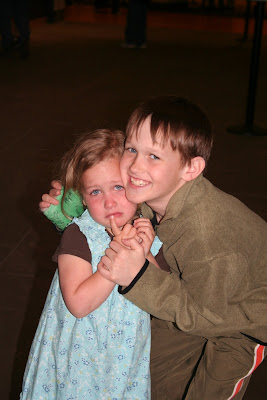 Lily was not doing so well...a classic.blood sugar crisis: 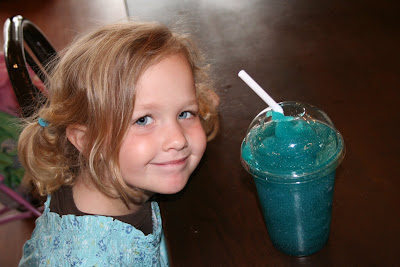 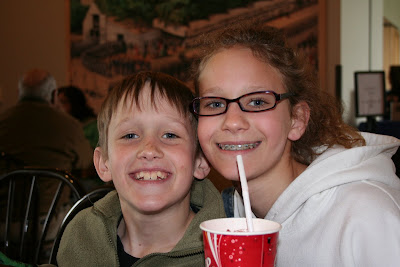 Here is the "happy picture" after a general family low blood sugar meltdown....hey, I tell it like it is....or was.....

Next up.....AUDIO TOUR!!!! Oh yeah! I was driving this train, so to speak, because Gettysburg had been my wish in the first place. ...And an audio car tour it was! 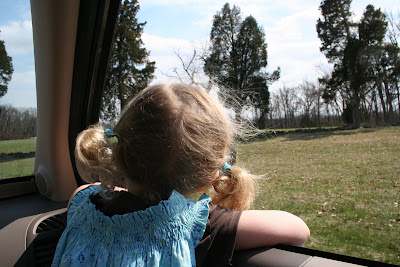 It was fascinating and powerful to look out on the battlegrounds while the commentator told the stories of the skirmishes. As will soon be evident in the pictures, we relaxed the seatbelt rule-- what can I say?....but we were going slowly....Oh...and we let them hang out the windows....and ride on the hood..........ok just kidding about the last part. 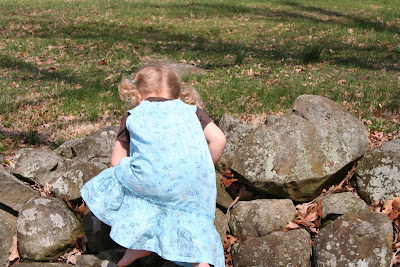 We stopped a couple of times to let them stretch and touch and climb.... 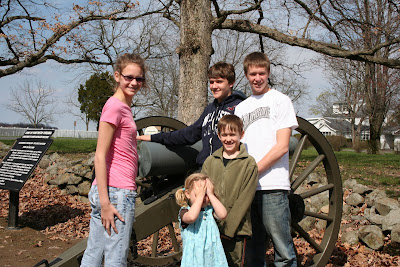 I wish I'd had them do a military pose. 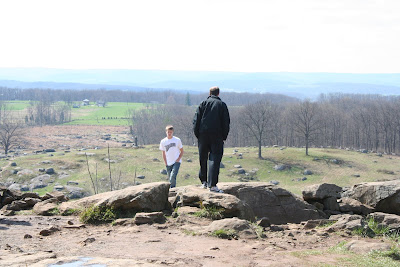 On top of "Little Round Top" looking down into "Devil's Den." Wow. 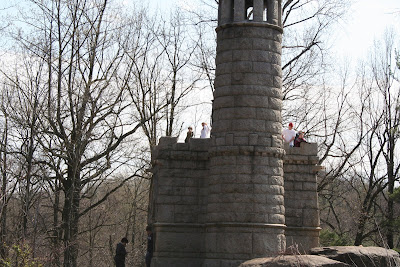 You can't see it well, but Timmy and Katie are aiming "guns" on us from above. Nice. 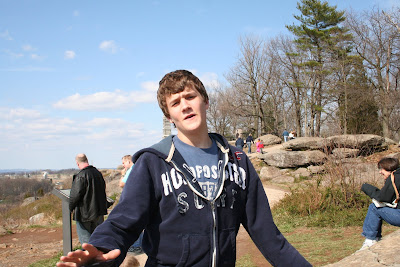 "You're ruining the moment, Mom." 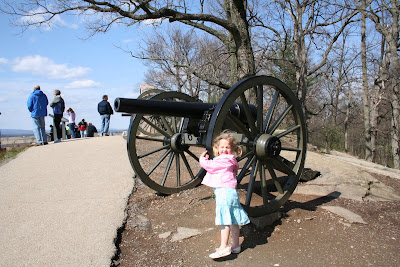 Hope the brakes are on that thing! 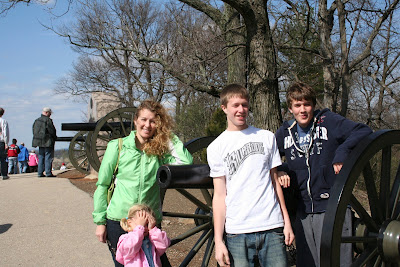 Nothing special here, but if I get a decent shot of me, I post it.

Our audio tour had about 17 stops! I was going for it, I tell you. We'd gathered from the museum earlier in the day that there was a battalion from Minnesota that fought at Gettysburg. At the beginning of our drive, Tim offered a dollar to whoever found a Minnesota Memorial first. We figured it'd be a little plaque sort of thing.

Then, as we were driving, the commentator started talking about the Minnesota boys! The car got quiet....When the voice said that Minnesota was the FIRST to promise troops when Lincoln called for arms, a ROAR of APPRECIATION and pride went up in the car. When the audio commentator then mentioned that only two hundred and some men actually volunteered instead of the promised 1000, there was a communal groan. But pride rebounded when we went on to listen to how the First Minnesota Volunteer Infantry Regiment of 262 men, along with the 20th Maine, valiantly held back Confederate breakthroughs which may well have turned the battle. Go MN! Our cheers ended with silence, though, when the voice finished with the fact that of the 262 Minnesota boys who went out to fight that day, only 47 made it through. 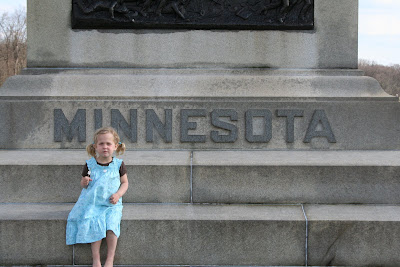 It was no small sacrifice
... 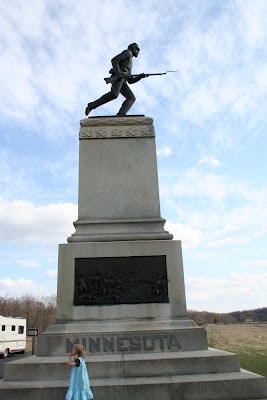 and no small plaque either. 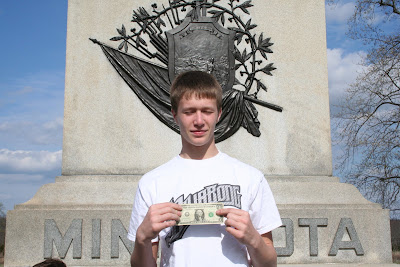 Andrew got his dollar for spotting it first.... tough one.... 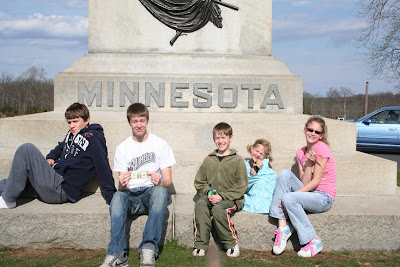 We probably weren't supposed to sit on the monument, BUT this was GETTYSBURG not D.C....and there were no "men in black" breathing down our necks, confiscating our forgotten stroller or giving us grief because we left a bag with a football in it on the sidewalk. It was just us, and sunshine (by this time in the day), and grass...lots of grass....and HEY....WE ARE MINNESOTANS! If anybody gets to sit on it, it should be us! Those soldiers were probably Swedish! 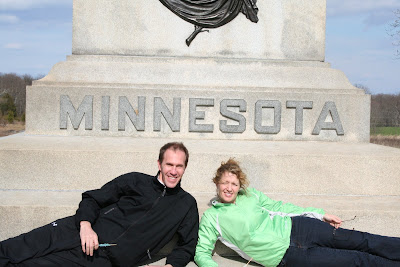 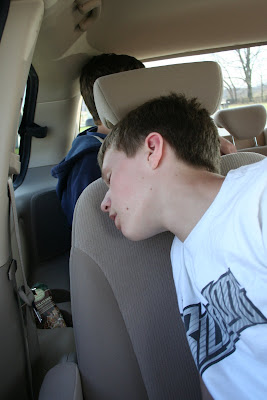 Here's Andrew overcome with emotion as we listened to the grand finale of Pickett's Charge. Poor guy, he took it hard....so hard that he doesn't even remember that part of the tour now. 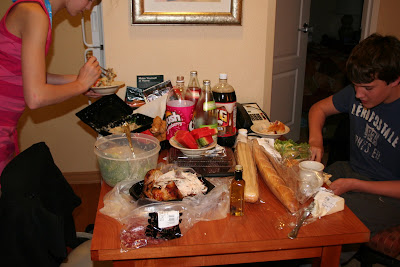 Leftovers from our meal with friends (now broke) from the night before....plus a grocery store pick-up....yes that's Brie cheese...very fancy... 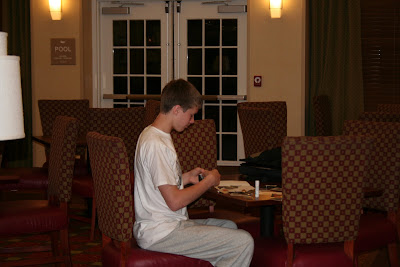 Andrew had a "collage" to make....while the rest of us swam. 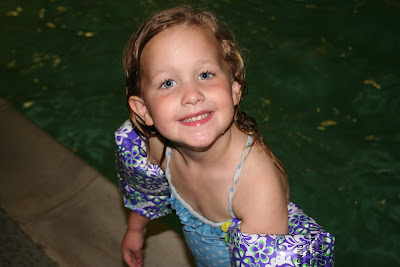 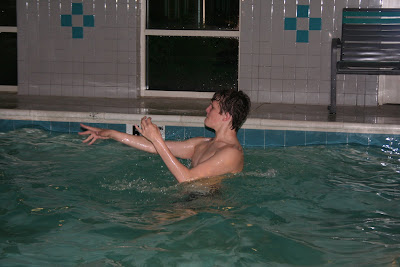 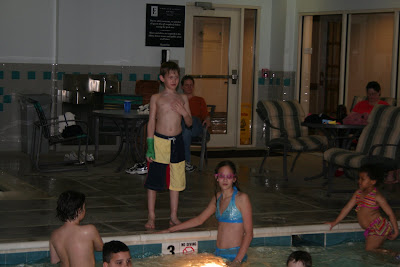 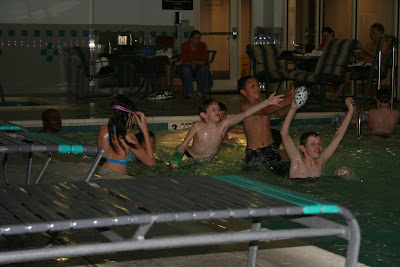 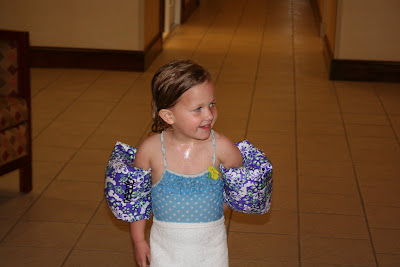 Miss Modesty...funny how she knows what to cover! 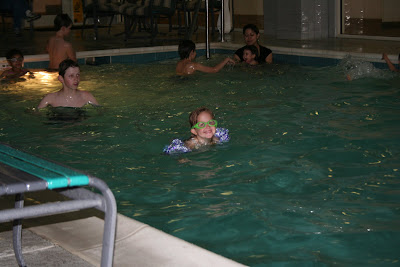