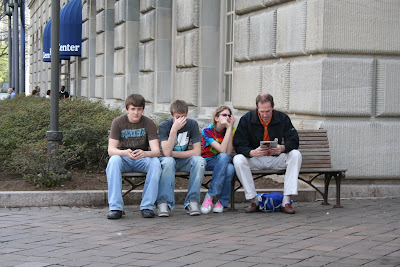 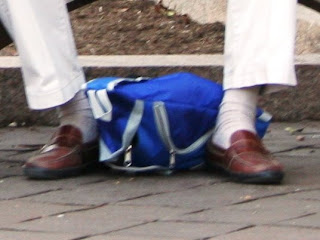 Here's a close up. Last known picture.
The Blue Bag was missing! We discovered nobody had it when Tim and the kids returned to Lily and I in the line for the Declaration of Independence, just as we were about to go through security. Instant stress.
SO, as soon as we'd laid eyes on the Declaration and a few other cool documents, Tim took off on a late afternoon chase to find our Blue Bag. He retraced our steps back to the Ford's Theatre where we'd been out of luck trying to get tickets for a tour a couple of hours before. As soon as he inquired after a BLUE BAG, he was taken in the back room for a real shake down. ...A second encounter with "men in black." They had it alright! And they REALLY do not like abandoned bags in Washington D. C....(or strollers.)
They were "holding" another guy back there who admitted to Tim in conspiratorial undertones that he'd done something "stupid."
Tim didn't ask any more questions, but it was NOT clear where Tim would be spending the rest of the day!
However, he talked his way through the situation enough that they let him go with some severe reprimands. This was the second time we almost ended up on the evening news....just curious... is Ford's Theatre TRULY that big of a target?
Posted by Suzanne at 8:24 PM