So, after our full day of the American History Museum, a "monumental" walk down the mall seeing the Washington Monument, the WWII. Memorial, the Lincoln Memorial, the Vietnam Memorial, the White House Big Lawn, a quick "jaunt" to the FBI building, a walk to and failed attempt to see Ford's Theatre, back to the mall for a runthrough of the Art Museum, a long wait and quick peek at the Declaration of Independence and a 9 block chaser by Tim for the "BLUE BAG," we were pretty much done in! One problem...it was only 5:00....we weren't due for dinner in Virginia with friends until 6:30...
Tim: "Let's take the metro and go to Arlington!" 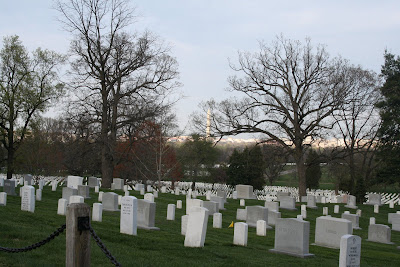 We hopped on the metro with the exhausted kids...who had no idea what they were heading into...and you know...why tell them? Let them enjoy sitting for ten minutes. The metro lets you off about 1/2 mile from the entrance gate, which you realize, once you get to it, is just the entrance to a LONG, UPHILL hike to Kennedy's Grave and the Eternal Flame, which is another long hike from the Tomb of the Unknown Soldier. 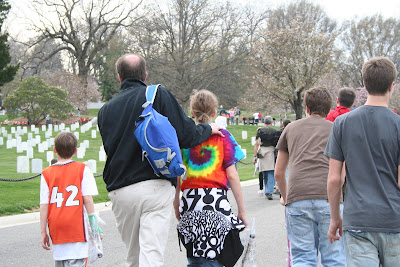 You can't appreciate the incline here. Just take my word for it. Tim was afraid Katie was going to go AWOL. 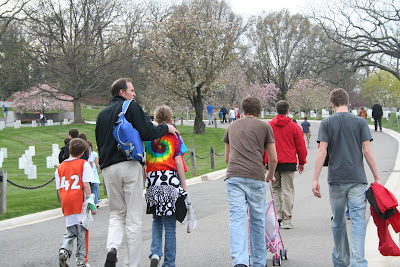 Tim is pushing Katie up the hill. 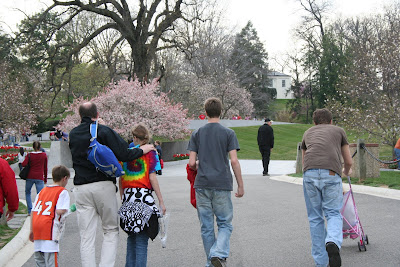 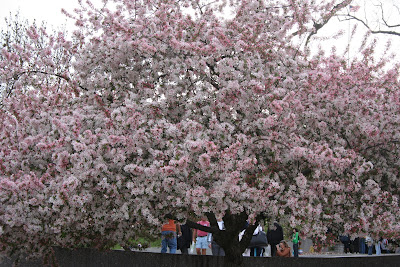 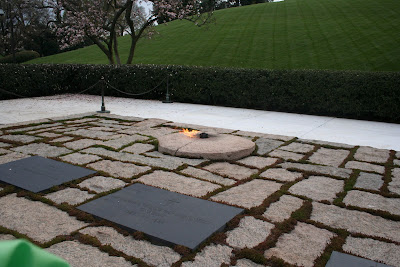 Here is the flame at the Kennedy grave site. 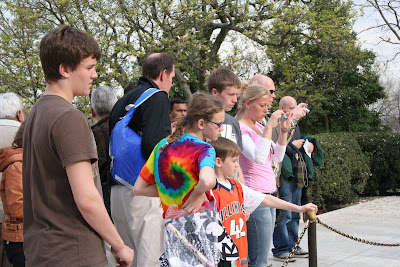 Do you know why I love this picture? Look at my kids. They are solemn. They are quiet. They are respectfully NOT picking on, poking, pummelling or pinching each other at all!...Granted it took low blood sugar, utter exhaustion and the presence of death, to do it...but it's just good to know it can be. 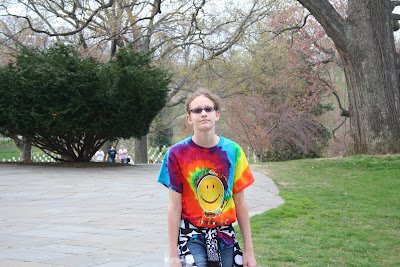 This was her face when we told her we were now walking further up to the Tomb of the Unknown Soldier. "We are hiking to his grave and we don't even know who it is?" That was pretty much the consensus until... 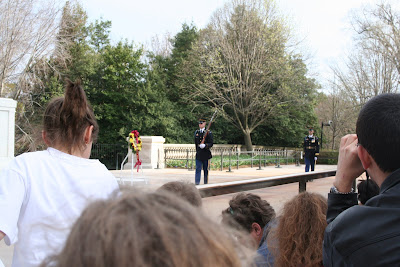 ... we got there a few minutes before the changing of the guard. It was touching and beautiful. And we could sit.
We sat for quite awhile, as a matter of fact, as the ceremony took place. It isn't short. All the while Tim and I, while appreciating the solemnity and completely thrilled that we'd happened upon it at the right time, were making "whatdowedo"faces at each other because it was CLEAR that if we didn't leave immediately, we would be late for our dinner reservation with friends. And we HATE being late... especially with people we see once a decade.
However, considering the seriousness of the sacrifices represented all around us, being worried about being late seemed somehow trivial.
Yet precisely two seconds after the gun got handed over, I was plunging into the crowd to bodily yank the younger kids out of the front row and drag them out of earshot (it was still silent) in order to inform them that we were now going to run.

"You can't run, Mom. It's a cemetery. You have to show respect."

"You are absolutely right, Zachary. Here's what. We will walk, but we will walk as fast as a slow RUN."

"Kids, listen up! Make it down this mountain (it felt like a mountain at this point) and you can order WHATEVER YOU WANT AT DINNER! ANYTHING!!!!"

"Seriously? We can get pops? And dessert? And we can order whatever we want off the menu?"

I believe it was at this point that, despite the above mentioned bribe, they suggested we just bury them there when they dropped dead. One of the boys actually picked out a nice spot. But that remark quickly brought on the realization of how blessed we truly are to have the freedom and ability and health to have a day such as we'd had, with a fun dinner with friends ahead of us. And all in all, despite our numb legs and light heads, we were all grateful we'd had a chance to see and think about the life sacrifices that have been made on our behalf.